A Grave Mistake is a medium level 50 quest which focuses on The House of Twain's history. This quest was added in the Hallowynn update in 2016.

This quest requires the player to explore the graveyard and solve a series of puzzles.

Note: You cannot start this quest if you have not completed The House of Twain quest. 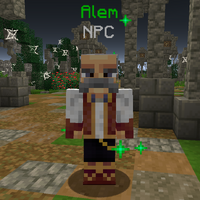 After you open the door at the end, enter it to reach a room with a tomb saying "R.I.P Mael Twain A guide and a friend.". Entering the room will trigger a few lines of dialogue and a cutscene.
Dialogue:

The cutscene shows a series of clips of the graveyard. First, it shows it in good condition, with Mael Twain helping spirits, however, after Mael dies, it shows the graveyard in its current rotten condition, and the spirits becoming restless.