A Sandy Scandal is a long level 32 quest centered in Almuj.

A big robbery is happening at Almuj. Thieves are stealing weapons and TNT to get the emeralds from the wealthy bank and the player is requested to help. 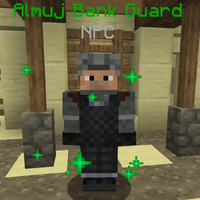 » Go to the witness report location.

» Go to the witness report location.

» Find the source of the detonation.

Note: if you used /kill to get outside of the quest cutscene in Stage 6, you can go to the house that exploded and it will bring you to the cutscene area.
Dialogue:

» Quickly! Go to the house. 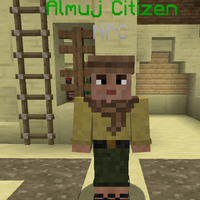 » Look for signs of the bandits' whereabouts. 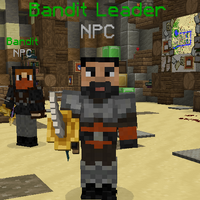 » Find where the bandits blasted a hole to get into the bank.

One TNT will spawn in a random corner of the room every 15-20 seconds. Stand on the pressure plate in front of the TNT for 2-3 seconds to defuse it. You will have 10 seconds per TNT to perform this task before it explodes.

Drop the TNT from the Bandit Leader into the hopper at the end of the room to blow open an exit and return to the main city.