Ahmsord is a large level 100 city near the edge of the Sky Islands biome. It is currently the highest level city in the Gavel Province and second highest in the game, as well as the trickiest and most dangerous to venture to. It is tethered to several sky islands (so even the city itself is quite dangerous, as falling off means death) and is divided into 4 main sections, each connected by bridges. The city contains most common merchants and amenities such as the Armour Merchant, Weapon Merchant and Potion Merchant, along with some exclusive ones such as the Wig Merchant and Literature Merchant. It is also fairly close to its neighboring city on the side of the Canyon of the Lost, Kandon-Beda. There are two known tier 1 loot chests located in the city.

Some centuries after the Fracturing of the Ahms Region by hand of the Ahms Colossus, a new group of pirates named the Skyraiders moved into the fractured Ahms Region, now named the Sky Islands.[1] They adapted to the environment thanks to their use of airships, which allowed them to establish complete control over the region, and established Ahmsord as their main base of operations.[2]

Around 573 AP, due to the Dwarves opening a tunnel between the islands and the Molten Heights, the Skyraiders' power started dwindling, as air traffic got scarce.[1] Thus, when the Villagers arrived in the Sky Islands to conquer and settle it, the Skyraiders were forced to abandon Ahmsord, and Ahmsord became a Villager city,[2] growing into the massive hub for heroes and adventurers that it is today. 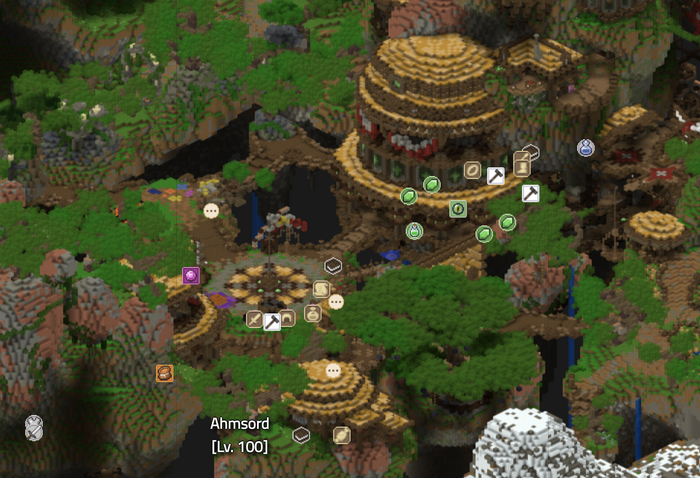