Almuj is a desert-city located at the far eastern part of the world in the Desert of Almuj, geared towards level 30-39 players. It is one of the largest cities in the Wynn Province, in terms of both size and wealth, despite the fact there is a Poverty Ridden Portion in South-Almuj. Adventurers travelling to Almuj will find a full compliment of merchants, an item identifier, and a majestic bank at the pinnacle of the city. The city also plays home to the mysterious "Banker", as well as a swath of rumours regarding an underground merchant. The city currently serves as the starting point of 3 quests, and heroes seeking out challenge will find convenient Almuj's close proximity to the Sand-Swept Tomb. The city is located on a crossroad between the vast savannah and the scorching desert. It is the gateway to the desert.

Travelers looking to make the journey to Almuj are advised to be of at least level 15, as the packs of dangerous ocelots roaming the bordering Savannah could prove deadly. Lower-leveled players can also enter by ascending the wall near Ternaves and walking safely across the top to Almuj.

Almuj was likely built under the Desert Empire, an ancient civilization that thrived in the Desert for many centuries before 1400 BP, ruled over by the "Emperor", who drew his power from his Sceptre. The city took on the name of the "Citadel" within the Eagle Tribe of the Mesa.[1] During the Emperor's reign, the walls separating the Desert from the rest of Wynn were built.[2]

Then, when the Emperor's son, Hashr, killed his own father to usurp his power, it backfired due to a curse placed upon the Sceptre, and the entire empire was buried under the sand as a result,[2] while Hashr himself was forced into the Sand-Swept Tomb.[3]

Some centuries after the fall of the Desert Empire, another group of Humans from Fruma reached the Desert,[3] around 800 BP,[4] and found Almuj and its walls. It is around this time that the Pharaohs began living in the desert, most likely of Fruman origin as well, and obtained the Yellow Crystal.[5]

Very recently, the Villager organization known as WynnExcavation staged a coup against the city, killing the Human Major of Almuj and replacing him with a Villager one who also worked for the company, allowing WynnExcavation to start digging in a site where they found the Yellow Crystal in a tomb belonging to Pharaoh Nabak, the Crystal being buried with him. The installment of a puppet government in Almuj also essentially placed the city under WynnExcavation's control.[6][5] 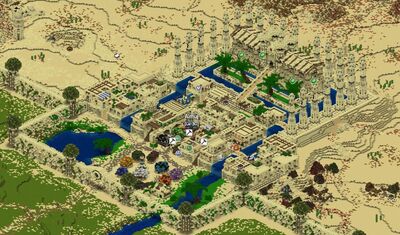