The Archer is one of the five playable classes in Wynncraft and uses a bow as its weapon. With a base defence rating of 60% and the most damaging weapon class in the game, the Archer is notorious for being a glass cannon. With low defense, Archers need to constantly regain health, whether through Life Steal, a Mage's Heal spell or Health Potions.

For in-depth information about play-style tips and tricks please refer to the Archer Guide.

The Archer's main attack fires a single arrow with high velocity and high range. It will deal damage to any mob or player it hits, and other targets in a very small area around the target, so it still deals some area damage.

The Archer's first spell, Arrow Storm, fires a barrage of arrows directly in front of the player, hitting enemies many times. Its upgrades increase the amount of arrows you fire with each cast.

The Archer's second spell, Escape, is the Archer's mobility spell that launches the player backwards, into the air, and slows their fall. At higher levels, it also grants the player and their allies speed and can blind enemies you land on.

The Archer's third spell is Bomb Arrow, which fires an explosive arrow that deals high area damage where it lands. At higher levels it also slows enemies and bounces to hit them again multiple times.

Finally, the Archer's fourth spell is Arrow Shield, a spell that grants the player a protective shield for a few minutes. When the player is attacked while Arrow Shield is active, all enemies nearby get damaged and flung away from the player. Further upgrades include increasing the amount of times it can trigger before disappearing, and adding an additional ranged counterattack to the spell.

The Archer's main attack fires an arrow with high velocity and high range. It will deal damage to any mob or player it hits, and other targets in a very small area around the target, so it can still deal some area damage. The Archer's attack also deals knockback inversely scaling with the bow's attack speed. Faster bows will push mobs back less, while slower bows will knock mobs back much further.

The Archer's spells vary from helpful utility spells to high-damage spells devastating in combat both against single enemies and groups. Like other classes, certain Major IDs can change the way some spells work. 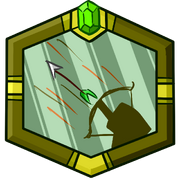 The Archer's first spell, unlocked immediately at level 1, is Arrow Storm. This spell fires a huge barrage of arrows in front of the player in a short time. Unlike arrows from your main attack, these arrows do not have the capability of dealing area damage and can only hit one target per arrow.

Arrow Storm takes 2 seconds to fire all 10 arrows. Arrow Storm follows the exact same trajectory as the arrows from your main attack or Bomb Arrow, so you do not need to worry about adjusting your aim.

Arrow Storm Grade II doubles the amount of arrows shot, for a total of 20 arrows, but it also slightly decreases their damage in exchange. It also doubles the rate of fire of the arrows, shortening the time it takes to fire all arrows from 2 seconds down to 1 second.

Arrow Storm Grade III triples the total amount of arrows shot by adding on two additional streams of arrows angled to the sides. It also reduces the damage per arrow again, to account for the increased quantity of them. This allows the Archer to hit a wider range of enemies at long range and greatly increases its damage output if they are close, since all of the arrows will hit. 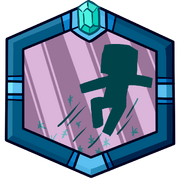 The Archer's second spell, unlocked at level 11, is Escape. This spell throws the player high up and backwards into the air, while slowing their descent as they fall back down. Like other movement spells, it cancels fall damage. The angle at which you are launched can be changed by looking in different directions. While you fall slowly, you cannot move horizontally, but you can attack and use spells. You can hold the Shift key to fall down faster.

Escape can only be cast if the player is standing on a block or if they are close to one. Hitting a ceiling while being launched by Escape will redirect your momentum horizontally. Swapping off of your weapon before the slow-fall effect is granted will also prevent the spell from halting your momentum, but it will make you vulnerable to fall damage.

Escape Grade II adds a huge mobility boost to the Archer and their allies by giving them a potent speed effect when Escape is cast. Speed III is equivalent to a +60% increase in walking speed, which greatly increases your ability to chase mobs, retreat, and dodge attacks.

Escape Grade III adds protection to the spell by adding a blind effect to the spell, so mobs will be temporarily stunned when you land near them. Blind is a similar effect to the stun of the Assassin's Spin Attack, except it forces the mob to lose sight of the player and move in a random direction for a second. Both effects are blocked by mobs with Blindness Crowd Control Immunity. 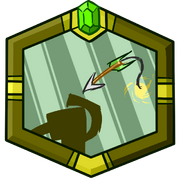 The Archer's third spell, unlocked at level 21, is Bomb Arrow. This spell launches an explosive arrow that explodes on enemies and blocks and hits all enemies within 3-5 blocks around the impact area. It also deals a good amount of knockback to the enemies hit.

Bomb Arrow follows the exact same trajectory as arrows from your main attack or Arrow Storm, so you do not need to worry about adjusting your aim.

Bomb Arrow Grade II adds a heavy slow to the spell and also prevents enemies from jumping temporarily after they are hit. This secondary effect does not really apply to mobs, but it does hinder players from jumping.

Bomb Arrow Grade III increases the effective area coverage and damage of the spell as the arrow will bounce off of blocks and mobs, exploding again upon impact and dealing damage. The arrow is very elastic when bouncing and can hit an enemy multiple times if hit by multiple bounces. 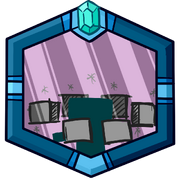 The fourth and final spell for the Archer, unlocked at level 31, is Arrow Shield. This spell creates a shield of arrows around the Archer, which will be activated by any enemy entering close range of the caster. When the shield is triggered, all nearby enemies are knocked away from the player and damaged. Arrow Shield disappears after one minute, if it has not already expended all its charges.

Arrow Shield will disappear whenever the player takes damage. These forms of damage include melee attacks, projectiles, enemy spells, and fall damage. When it disappears in this fashion, it will not deal damage to nearby mobs or knock them back.

Arrow Shield Grade III adds a whole new counterattack to the spell that triggers when the player takes damage, separate from Arrow Shield. Arrow Rain sends a huge ring of 100 arrows that travel upwards for a short period, then launch themselves downward and damage any mob they hit in a large area around the player.

Mobs can be hit by multiple arrows from Arrow Rain at once, for heavy damage, and unlike the Mage's Meteor spell, which also falls from the sky, these arrows can be obstructed by blocks. Arrow Rain will not work in areas with low ceilings.