Outdated Content
The following page contains information about content that is outdated as of update 1.20 and has not been updated yet. You can help Wynncraft Wiki by updating it.
The Clock Mystery is currently incomplete with the rework of the Gavel Region in 1.20.

The Clock Mystery is a hidden mystery that serves as a bonus adventure for anyone who seeks a puzzling challenge. Though the mystery is lengthy and elaborate, it rewards in end with the Clock Set. If you wish to find out how to do this yourself you are encouraged to stop reading here.

This section contains all the information you need to find the clocks.

The location of Llevigar's Dusty Clock is located in a building west of the Bank, go in the building and continue straight. Go past the stairs and then you will see a green hexagon to your right. Go right, past the entrance to the prison, and you will see a Dusty Clock mob in front of you. Kill the mob to get the clock.

To get a new clock, you just simply have to return to the corpse, and right-click on it again.

Olux's Old Clock is purchased through a salesman in Olux. There is a Frustrated Citizen NPC claiming that they have been scammed out of some money that is located near the salesman. Go to the Olux Salesman in his stand and he will say that he will sell it to you for 2 Emerald Blocks.

It has to be the exact item, not 128 Emeralds, or going over the limit.

Efilim's Busted Clock is located in a giant Orange tree near Likeru. There will be some mushrooms that you bounce off of to get to the top of the tree, where the clock is located at.

Shiar's Maddening Clock is obtained through speaking with Bulbo. After going through all of the dialogue, you get the clock. This makes this clock quite easy to get.

If you log out or /class out, Bulbo will reappear, claiming that the clock basically duplicated itself, and gives the new Maddening Clock to you.

Aldorei's Defective Clock is the hardest clock to get out of all of these. First, you must head into the main square of Aldoeri Valley, then head up the Spruce Stairs to get to a school. Go up the elevator to get to the second floor, and then go to the first door on the left. In there, you will find a student of the school, who lost 3 documents.

The player is then tasked with retrieving them. The first document is located in a room adjacent to where the student is, climb up the ladder and there will be a paper there, which you right-click to get the document. Go back to the first floor, to the main hall again, and then go to the room across the one where the student is. On a table in the room, there will be a document there. The last document is obtained by going outside of the main hall, to the balcony of the school, and there will be a document on a fence of the balcony. Once you have all 3 documents, return to the student, who will then give you Aldorei's Defective Clock.

If you need to get a new Defective Clock, you can just speak to the student again and she will give you a new clock without having to fetch the documents.

Cinfras's Abandoned Clock is found in a Retired Clockmaker's home.

To access the room where the clock is located, you need to get a basement key located in the southeast block of Cinfras.

If you need another clock from Cinfras, just go to the Retired Clockmaker's Basement.

Upcoming Content
The following page contains information about content that is currently not implemented in Wynncraft but officially announced and confirmed for future updates. 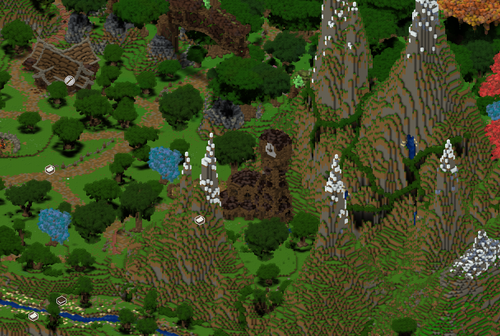 The Clock Dungeon is located underneath a tower with a giant clock on the top, which can be seen in the image above. It is close to the starting NPC for the quest From the Mountains. In order to gain access to the dungeon, you have to complete a parkour around the clock itself. Said parkour starts at the south side of the tower. When you completed the parkour, press the button where the hands meet on the western clock. This will open a 2x1 door through the dial.

To defeat the dungeon the player must fight 8 different bosses, each requiring a specific clock from varying parts of the Gavel Province.

The Tokens to fight Kronos are dropped off of each mob before him. In order to Kronos' boss room, simply drop Cinfras's Busted Clock and the 7 other tokens directly onto the pressure plate.

Even though there is no minimum suggested level for 'Clock Mystery'. The highest level mob you will face is level 80.

Kronos can be killed multiple times by waiting for him to respawn, allowing a player to get more than one Golden Clock without having to get all the broken clocks again.

For information on the golden clock, visit the Clock Merchant page to figure out how to spend your golden clock.