Cooking is one of the eight Crafting Professions. It involves using refined Meat and Grains along with certain Crafting Ingredients to craft Food. Cooking is performed at any of the Cooking Stations found throughout the world. 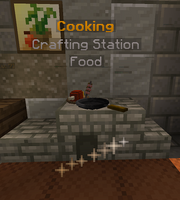 Food are consumable items that can heal the player's health or provide additional effects, depending on whether Crafting Ingredients are used or not. They have extremely long durations and only affect their user.

Without ingredients, crafting Food results in a basic Food that lasts 60 seconds, has 3 charges, and heals the player for an above-average amount. This is similar to Alchemism and Scribing where the basic crafted item is similar to a Potion of Healing.

With ingredients, Food have a much longer base duration, ranging from 18 minutes at level 1 to 48 minutes at level 105. They no longer heal, but rather grant the player temporary identifications. Using different ingredients will add different effects. A crafted food's number of charges varies depending on its level, but can also be increased or decreased by certain ingredients.

Food recipes share the same amount of healing as potion recipes, and their duration is exactly three times that of potion and scroll recipes.

There are currently 28 cooking ingredients in the game recorded in this wiki.