Corkus City is the capital city of the Corkus Province. It has a Bank, Item Identifier, Powder Master and Blacksmith, along with the new Powder Exchange, which currently only exists in Corkus. There are many tier 1 and tier 2 loot chests in the city, as well as two tier 3 loot chests.

Corkus City was founded by the Corkians, a group of Humans who escaped their homeland of Fruma 350 years ago by crossing its northern mountain range, reaching the island of Corkus.[1] They settled on the island and founded the city under a democratic government led by the City Council.[2] However, there was a population native to the island that already lived there for a long time: the Avos, a bird-like humanoid species that lived in the highlands.[1]

The Avos welcomed the Fruman refugees to the island, but as the Humans kept spreading and expanding through the land, they were forced to only settle in the mountains of Corkus, in the modern-day Avos Territory.[1] Not all Avos were content with letting the Humans take over the island, one example being the Phoenix Prince, who would later lead his people underground and create a city. As the Avos were not adapted to living underground, they slowly lost their feathers and died out.[3] Nonetheless, the Humans and Avos were allied and mostly on good terms.

As they were left to their own devices for hundreds of years, the Corkians, who'd lost all of their magic knowledge after crossing the Fruman mountains, invented a new type of magic named electromagic with which they built most of their modern infrastructure: from mechs to batteries.[1] At some point, they even built the Factory, a massive structure which they called their "national monument". The Factory could produce an entire army of mechs in a week.[1] However, the intelligent mechanism which led the Factory, the Antikythera Supercomputer, later went "haywire" and started defying the Corkians as it believed that they were destroying the island and threatening the Avos.[4]

Relations between the Corkians and Avos soon soured further, as the Avos believed that the Humans were harming the environment with their inventions and with the desperate Factory-produced mechs that travelled through the island, scavenging scrap metal for spare parts and at points threatening the City itself just to obtain new material.[5][6] As the Factory began actively working against the Corkians, they shut the entire structure down, which continues to lay dormant to this day.[1]

When the Ocean's waves were calmed by the mages of Mage Island a hundred years ago,[7][8] the Corkians built a large port behind the City's castle, the Corkus Docks, with which ships could enter and leave Corkus at any point. At some point, they also established a hot-air balloon travel system with the Villagers of Kandon-Beda. Corkus Island was still recognized to be Avos territory by all other provinces,[1] which prompted Corkus City to send out envoys to cities such as Selchar in an attempt to gain recognition, creating a travel system between the two cities through the C.S.S. Wavebreaker ship.[5]

However, a group of patriots called the Corkian Separatists didn't want to welcome tourists and envoys from Wynn or Gavel, their leader claiming that if they did, the Wynn Humans' bloodlust and the Villagers' greed would ruin the province, which up until that point had remained relatively peaceful, far from the Corruption War or the Decay. They set up hideout in the docks of Corkus City, where they remain hidden to this day.[9] 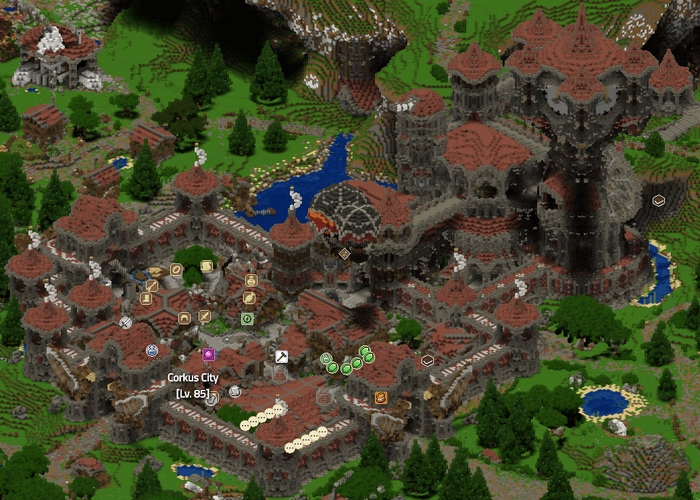