Corrupted Betrayal is a long level 52 quest around the Undergrowth Ruins Dungeon and the Jungle.

Slykaar, a shaman, used to protect Troms by sacrificing people. However, when Bob came to Troms, the people rejected Slykaar. Now, Slykaar seeks revenge against the city, and the player must find a way into the Undergrowth Ruins to stop him. 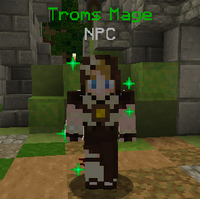 » Use the Mage's riddle to figure out where it leads

» Explore the temple for a way to break the barrier.
Dialogue:

Entering the room at [-1668, 49, 602] will cause the machine in the room to activate and spawn a slime which you must kill to progress.

Right-click the key into the door lock to progress.

The Strange Invitation can be found on the floor at [-1690, 49, 604]. By picking it up, you can read the following description:
The letter says in faded letters:
"The King of Troms has hereby invited you to help assist in fighting off the undead. As a gift, we have lent a house to you so you can live near Troms for the time being. Your house will be at the coordinates: [-732, 65, -974]
Signed,


Andoni, Advisor for the King of Troms"

» Go to Slykaar's residence to find out what is hidden there 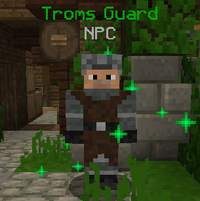 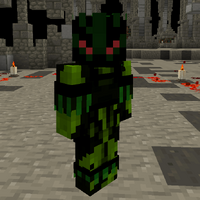 » Get through Slykaar's dimension to reach the incantation

You need 25 Slime Chunks to create a bridge to the next island. Then, you must continue crossing islands via an invisible path and some slime parkour. As you progress, Slykaar will continue talking to you.
Dialogue:

» Wait for the Mage to cast the incantation on the barrier

The Mage will use the spell on the barrier, creating a series of particle effects and sounds.
Dialogue: