This dungeon has a corrupted variant; see Corrupted Decrepit Sewers.

"The filth of Ragni was once used as a prison for it's worst criminals, but now it houses a greater evil. After the corruption, dead inmates now trap any soul in oubliettes and await them to join their ranks."

The Decrepit Sewers, subtitled "If These Walls Could Talk...", is the first and lowest level Dungeon in the game, designed for players of level 9. It is located in the city of Ragni's ancient sewers, formerly used as a prison for the worst kinds of criminals and now overrun with skeletons, ghosts and other malevolent undead. The boss is Witherhead, a powerful corrupted skeleton who has claimed the sewers as her own lair.

The entrance to the Decrepit Sewers is located just outside Ragni's northern gate, near Katoa Ranch on the road to Maltic, in a large, ruined stone archway.

Preparing for the Dungeon[]

The Decrepit Sewers is recommended for players of level 9-18, and is located just north of Ragni. It cannot be accessed until the level 5 Dungeon Quest Sewers of Ragni has been completed, started by talking to Jenprest outside the sealed dungeon entrance. A Potion Merchant is also located next to the entrance, and will sell low-level Healing Potions to players in need of them. If hard-pressed for Emeralds, you can kill the level 1 Weak Zombies spread around the entrance for some.

The entrance to the dungeon is guarded by a Key Collector, who will not allow you to enter unless he is given a Decrepit Sewers Key. To acquire a key, you have to kill a Decrepit Sewers Key Guardian, an uncommon mini-boss that spawns around the Emerald Trail and the plains north of Ragni. The Guardian has four forms; once its health has been depleted three times it will become passive and drop the Decrepit Sewers Key. One free Key is also given as a reward for completing the Sewers of Ragni quest.

It should be noted that while Emerald and Experience rewards are available at all levels, the equipment rewards are only designed for low-leveled players. If in search of better equipment, it is recommended to complete one of the higher-level Dungeons instead.

After giving a Decrepit Sewers Key to the Key Collector, you may enter the dungeon by jumping down the sewer pipe at the entrance.

A Helpful Guide can be found at this link: Click Here 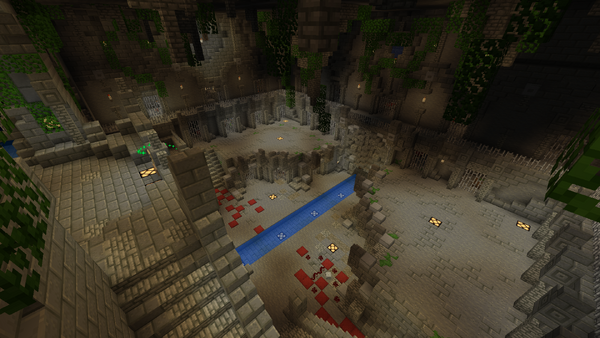 You will be dropped into a long, flooded pipe; a series of ledges on the left side provide a simple parkour course, though it is also possible (albeit slower) to simply swim to the end. The pipe exits onto a ledge in the next room. The other end of the pipe will be a large room with several raised platforms and a locked door at the far end. Several Skeletal Guardians, Wailing Skeletons, and Crumbled Skeletons spawn throughout the room, alongside a few very fast-moving Tormenting Ghosts. Each mob drops a Decrepit Sewers Token, and 18 tokens in total must be collected in order to proceed to the next room; simply drop them into the hopper at the center of the room to open the door to the next phase. 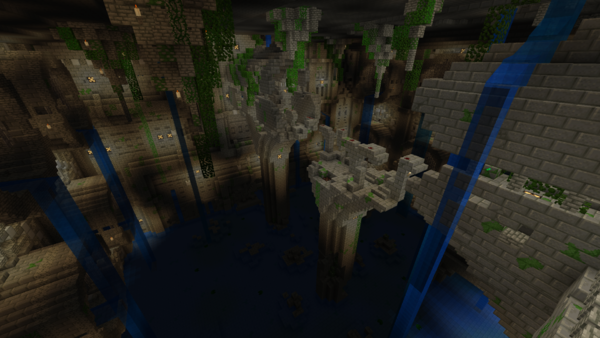 After exiting the previous room you will find yourself in a narrow flooded tunnel, with several cobblestone outcroppings throughout. This tunnel is generally safe, though you may occasionally be harassed by weak level 3 Sewer Rats. At the end of it is a large room filled with water, with a collapsed pipe crossing the gap. This pipe serves as an easy parkour course allowing passage across the chamber and to the next phase. If you fall into the water, you will be teleported to the beginning of the parkour and will have to complete it again; However, most sections of the parkour have fragments of the pipe underneath them, so many times you will simply be able to jump back onto the parkour after a fall. 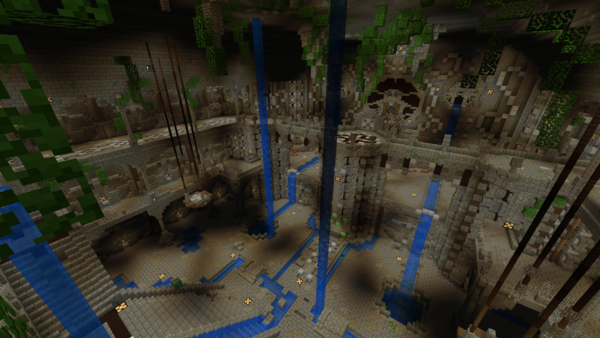 The fourth phase is another combat challenge, taking place in a very large room built on various levels. A total of 26 Decrepit Sewers Tokens must be collected in order to progress to the boss phase, dropped from almost every mob in the chamber. All the mobs from the previous phases can be found in this phase, along with groups of weak Howling Skulls and the first ranged mobs in the dungeon, Blazes and Flaming Skeletons.

After entering the room, head down the stairs, killing enemies and collecting tokens along the way. The first Blazing Skeletons, fire-based mobs who attack at a distance, are found on the staircases. Once at the bottom, progress through the small door in the center of the room; it will close behind you, and you will now be faced with a small parkour challenge to reach the next floor.

There are two signs in the central pillar:

Continue moving upwards and around the room, collecting tokens. On the next level, the path splits into two, each going around one side of the room; which path you use is irrelevant. On both paths, you will be faced with several enemies, along with a Flaming Skeleton on a hanging platform. While similar to Blazing Skeletons, these mobs can be very dangerous for low-levelled players, as they attack extremely rapidly and respawn quickly. However, in front of each is a row of pressure plates; these can be stood on in order to build a temporary wall, blocking the Skeleton's attacks. It is recommended to avoid actual combat with them and continue to the top floor.

At the top floor, you will be faced with a large group of Tormenting Ghosts and Howling Skulls, which can be used to gain more tokens quickly if you are still short. Once you have at least 26 in total, drop them into the hopper in front of the small door to open it, and proceed forwards. Now is the last chance to prepare for the boss fight. Once you are ready, press the button and enter the dark tunnel to enter the boss phase. 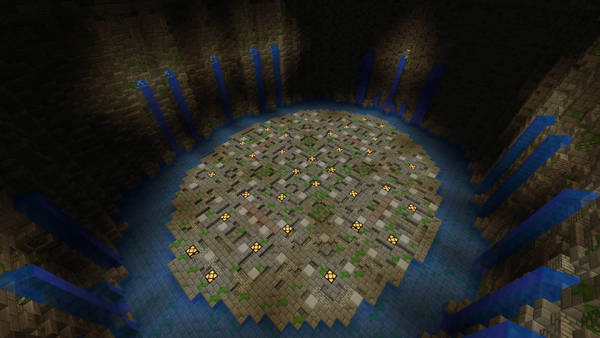 The boss of the Decrepit Sewers is the level 15 skeleton Witherhead, the "Black Plague of Ragni." The arena is large and circular, with water around the edges, and several level 8 Witherhead Spawn appear around it, attacking in close combat. Witherhead herself attacks with a bow, occasionally also using a dangerous spell similar to the Archer's Arrow Storm to rapidly fire arrows at combatants. She deals a small amount of Thunder damage with each hit, but is also weak to elemental Air; therefore at lower levels, the best available Air or Water equipment is recommended.

At four points around the arena are rows of pressure plates on red clay: these plates activate temporary walls, similar to the ones used to defend against Flaming Skeletons, to provide respite from Witherhead's attacks (her Spawn can still reach you when a wall is up, however). Only two of the four rows of plates is available at any given time; after activating one, a different one will become available.

Complete the fight with Witherhead, depleting her health and killing or avoiding the Spawn, and use the temporary walls to defend against her Arrow Storm attack. After she has been killed, you will be teleported to the entrance of the dungeon and given your rewards.

The Dungeon Merchant in from of the entrance of the Decrepit Sewers sells: