Detlas is the central city of Wynn Province. It is home to many merchants and the starting NPCs for several Quests. It also houses a Bank, which is one of the first Banks easily accessible to lower level players. Detlas is referred to by certain signs throughout the province as "Detlas (Trading Town)". Despite its low-level features, it is the most popular city in Wynncraft for players of all levels, even in the endgame.

Detlas was once a small, quiet farm village in the middle of the Wynn Province. However, after the Nether Portal opened and the Corruption started spreading across the province, the town was attacked by the corrupted warlord Bak'al in 78 AP and abandoned by its inhabitants, who fled to Ragni or Troms.[1]

Many centuries later, when the Villagers came to Wynn, they helped the Humans build modern Detlas on the ruins of the old town, and it became a trading town, as well as the center of the Wynn Province.[1][2] An airship system was also established between the city and Cinfras, the center of Gavel, which allowed quick travel between the two cities.[3] 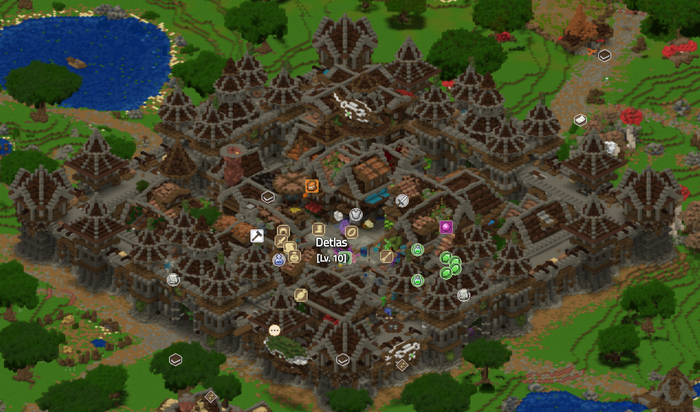 The four gates of the city are defended by level 20 Guard Golems, and are marked by signs pointing to Ragni, Nemract, Almuj and Nesaak, respectively.

All eight Crafting Stations are found in the Detlas marketplace, in close proximity to one another and to the Bank. Paired with the abundant low-level Materials that can be gathered around the city, the area is a good place to start training Professions.