Efilim is a small town of Elves and Villagers located as the capital of the Light Forest and is one of the two elven towns in Gavel. It is a vital spawn point for many quests located in the area and is useful on trips to Cinfras for lower levels. Efilim is also home to the only known Charmcrafter Merchant in Gavel, the other one found in the Iboju Village in Wynn.

Efilim was founded by a group of Elves who had been kicked out of Aldorei by the High Elves for breaking the town's "utmost laws", possibly having refused to worship the Light. They decided upon Efilim's location by following after three fairies, whom the exiled Elves had tended to, and in exchange the fairies led them to a shrine around which the town of Efilim was built.[1]

However, it wasn't just Elves who inhabited this town cooped in the forest: as people of each race were allowed, the settlement's population soon turned into a mixture of Elves and Villagers who lived together in harmony and peace, unlike the very strict laws of Aldorei which prohibit Villagers from entering due to their greed.[2] Today, Efilim is one of the quietest and most peaceful towns in Gavel. 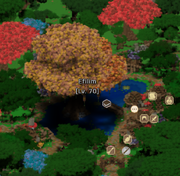 • The South-East Gate leads to The Forgery and eventually the city of Cinfras (City). • The North Gate heads towards the Dark Forest and the town of Gelibord. • The North-West Gate leads to the east branch of the River Sage and the rest of the Light Forest. • The South-West Gate heads towards the rest of the Light Forest and eventually the town of Bucie.

• The yellow tree in the center of the lake is part of the Shattered Minds quest and where the player can find Elder Berusia. • There is a shrine telling the story of two elven sisters and three fairies.

•
Likeru can be found standing on the wooden pier on the south side of the pond.
•
Elder Berusia is located at the end of an underwater cave underneath the huge yellow tree in the middle of the pond.