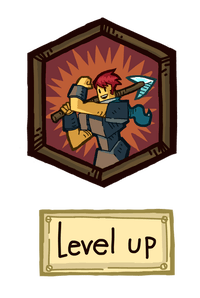 Experience Points, or XP (sometimes EXP), are needed to level up in Wynncraft. Combat XP can be earned from killing mobs, completing Quests and Mini-Quests, Dungeons, Raids, Boss Altars, finding Territorial, World, and Secret Discoveries, or from several other minor sources, such as Legendary Island.

Most quests, discoveries and items such as weapons, armour and accessories have clearly-displayed minimum level requirements that must be met in order to access or use them.

The amount of XP gained towards the next level is always displayed in the green XP bar at the bottom of the screen. It can also be viewed as a percentage in the character info screen. In general, the primary level cap on any given character is 105; however, a "bonus level" can be achieved at the true level cap of 106. Reaching level 106 from level 105 requires the same amount of XP as reaching level 105 from level 1.

Completing quests and mini-quests gives the player a significant amount of XP as well as any other reward the quest has. Quest and Mini-Quest XP cannot be boosted in any form.

Some quests give lower amounts of XP if you complete them before their intended level.

As of update 1.20 Gavel Reborn, the maximum amount of XP you are rewarded after finishing every single quest is 137746211, this is only ~27% of the XP needed for level 106, which is the current level max.

Wynncraft has a dynamic leveling system. Killing mobs near the player's level will reward them with much more experience than killing mobs much higher or lower than their level. For example, a level 15 player would level up the quickest by killing mobs from level 12-18, whereas a level 40 player would be best grinding level 37-43 mobs. Each level of difference between the player's level and their enemy's level, there is a 3% chance to earn no experience at all from a kill. A level 15 player has a 15% chance to earn 0 XP on a kill from Lv. 10 and Lv. 20 mobs.

Mob XP can be boosted by XP Bonus, Double XP, Charms, Partying, and Tomes. It can also be indirectly boosted by Mob Totems.

Completing a dungeon rewards the player with a large amount of XP alongside other rewards like dungeon fragments, emeralds, and items.

Dungeon XP can be boosted by XP Bonus, Double XP, Charms, and Tomes.

Completing a raid rewards the player with a fixed amount of XP. Raids typically give less XP than dungeons as the majority of their reward comes from the Raid Reward Chest.

The player can gain XP from exploring new territories and major locations in the world, or by completing Secret Discoveries. Discovery XP cannot be boosted in any form, like Quests.

Discoveries often have combat level minimums to unlock, so a low-level player cannot immediately go to a high-level area to gain its discovery XP.

Certain items with the XP Bonus ID can the increase experience the player gains from certain sources by a percentage. Temporary XP bonus can also be granted by crafted consumables or Potions of Wisdom.

For example, if an enemy gives 55-70 experience on average and the player has 15% XP Bonus, they would gain 63-80 experience upon killing that enemy instead. XP Bonus stacks when provided by multiple items, and your total value can be viewed in the character info menu. XP Bonus increases experience gain from Mobs and Dungeons. It does not boost experience from Quests, Discoveries, and Raids.

XP Bonus from Charms only works on content within the level range specified on the charm. The charm will also only be active on the class that earned it, as Charms are a Soulbound item.

Experience gain can also be directly doubled, tripled, or even quadrupled. Sources of Double XP include:

When multiple sources of Double XP are present, they stack additively. For example, having both a Discord Link Boost and a Combat XP Bomb active means you will have tripled XP, and quadrupled XP if all 3 boosts are active. Just like XP Bonus, Double XP boosts cannot affect Quests, Discoveries, or Raids.

By forming parties, all players in the party can share a portion of their XP gain with other party members. When a mob is killed by a player, another 20% of the experience gained will go to nearby party members. The player who killed the mob gains full experience.

While they don't directly boost XP gain, they can increase the spawn rate of mobs that can be killed for XP. Mob Totems can only be obtained from having a rank, where a certain number of them is given to the player each day.

Tomes of Slaying and Dungeoneering Mastery can also give a large boost to the XP gained from mobs and dungeons, respectively. Tomes are obtained from Raids.

The official XP chart, accurate as of the 1.19 update, as shared by Salted. The source can be found here.