Festival of the Blizzard

Limited Time Event: This article covers an event that lasted for a limited period of time before ending.
The event's content will no longer be accessible after it has ended, but collectibles and cosmetics earned by the player will persist. 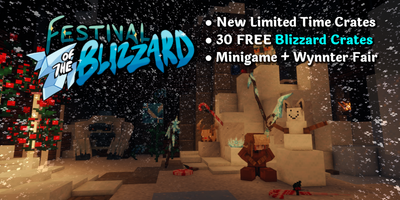 During the event, players were able to obtain exclusive cosmetic items and Pets from Blizzard Crates, similarly to the rewards from regular Loot Crates. Three free Blizzard Crates were available to all players from the start of the event, and can be claimed in the Wynncraft Store. Further crates could be obtained in-game by completing Daily Objectives (Tier I crates), and Weekly Objectives for players in a level 10+ Guild (Tier II). A maximum 30 Blizzard Crates could be obtained for free, while additional crates were available to buy from the Wynncraft Store until the end of the event.

In addition to the rewards from Blizzard Crates, a winter storm passed over Detlas, redecorating it for the holiday season as Snow Storm Detlas. The Traveler and Gerald the Yeti could be found by the large Craftmas tree in the center of the city, and the Souvenir Sweater Merchant, Rusty Bartender, and a Craftmas Cracker Vendor also set up shop; numerous other NPCs from around Wynn Province could be invited to join in the festivities throughout the event. The Festival coincided with the 2021 Wynnter Fair, which could be reached by taking the Event Airship Pilot's ship at Detlas Airbase.

Throughout the Festival, players could invite NPCs from throughout Wynncraft to Detlas to join the festivities. There were 20 invitees in total, and new ones were unlocked every day from 10th to 24th December; The Traveler gave hints on where to find possible invitees. Before each NPC agreed to come to the city, a short mini-quest had to be completed for them. You must also have completed the NPC's respective quest before you could begin their invitation. After arriving, the new NPCs provided new dialogue and extra content.

Starting on 25th December, Christmas Day, players were be able to talk to each of the NPCs they'd invited again to be gifted additional rewards, including several exclusive items and consumables. The Traveler and Yahya also gave out unique rewards after 25th December, the Emblem of the Blizzard and the Yahya Sapling respectively. 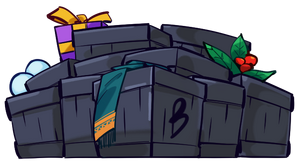 Blizzard Crates are a new type of crate obtained by doing objectives during the Festival of the Blizzard. There were four ways to obtain them:

In total, there were 7 pets, 7 player effects, 15 weapon skins, and 12 hats available from Blizzard Crates.