Festival of the Spirits 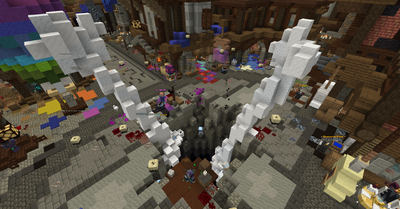 The Festival of the Spirits is a limited time in-game event currently running from 8th October, 2021 until Halloween, 31st October, 2021.

During the event, players are able to obtain exclusive cosmetic items and Pets from Spirits Crates, similarly to the rewards from regular Loot Crates. Three free Spirits Crates are available to all players from the start of the event, and can be claimed in the Wynncraft Store. Further crates can be obtained in-game by completing Daily Objectives (Tier I crates), and Weekly Objectives for players in a level 10+ Guild (Tier II). A maximum of 27 free Spirits Crates can be obtained by completing objectives; additional crates will be available to buy from the Wynncraft Store until the end of the event.

In addition to the rewards from Spirits Crates, Detlas has been redecorated for the Halloween season, and the Item Identifier's structure in the center of the city has been replaced by a large pit. Three new NPCs found in the city – The Guide, The Envoy, and The Seer – offer other activities for extra rewards and exclusive items during the event, including the daily Guiding of the Spirits, and the weekly Drawing of the Spirits.

Guiding of the Spirits[]

The Guiding of the Spirits is an activity that can be started by speaking with The Guide, involving finding lost spirits throughout the Wynncraft world and guiding them back to the pit in the center of Detlas to be exorcised. After they agree to help, the Guide gives players a Spiritual Tuner, which can be used to be pointed in the direction of the nearest spirit. After one is found, it will follow the player who found it until being returned to the pit in Detlas. Using Fast Travel or Teleport Scrolls will not cause the spirit to stop following you.

A new spirit spawns every day over the course of the event at 6:00 AM UTC. You can speak to the Guide to see how many spirits are currently active in the world, and how much time is left before the next appears. For each spirit that has been returned, the Guide will reward the player with 6
Emerald Blocks and 2
Spirit Fireworks. After 5 spirits in total have been returned, they will also award the
Emblem of the Spirits. There is also a reward for returning all 24 spirits.

Drawing of the Spirits[]

The Drawing of the Spirits is a raffle that will take place 3 times over the course of the Festival of the Spirits, once per week. The drawing times are staggered so that players in all time zones have a good chance of being able to participate. The times are as follows:

To participate, you simply need to be online and standing near The Seer's podium, in the square in the northwest corner of Detlas, at the moment the timer hits zero. All players will be counted as long as they are close enough to see the timer and rewards hologram next to the Seer.

When the timer reaches zero, all players in the vicinity will randomly receive several rewards, consisting of Emeralds (up to 32 Liquid Emeralds total), Runes (up to 48 total), and Powders (up to Tier 6), scaling with combat level. Everyone is also guaranteed to receive at least one of several exclusive items, consisting of unique consumables and collectibles; these are all tradable, and can be viewed before the drawing by speaking to the Seer.

Spirit Crates are a new type of crate obtained by doing objectives during the Festival of the Spirits. There are four ways to obtain them: