Frost Bite is a long level 48 quest located within the Ice Canyon. It replaced Frost Bitten in the 1.18 Economy Update.

Eppo is looking for a way to get into Theorick's Mansion to get his wealth. When the player arrives at the mining site, he asks them for help.

Walk up next to the drill.

The drill will spark, then move a little into the ice wall and blow up without damaging the ice.

» Go deeper into the cave and speak to Rhudya. 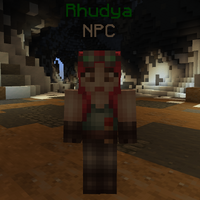 Parkour across the ice platforms in the cave.

» Return to Eppo with the tnt.
Avoid the mobs in the cave to reach the exit and return to Eppo.

Rhudya will blow open another entrance to the cave.

» Travel to the lava springs through the mineshaft.

» Complete the puzzle and bring the lava back to Eppo.

Upon completing the puzzle:

Eppo will fall through a hole that opens in the floor.

» Find the riches in Theorick's mansion.
Walk upstairs to the library.

Eppo will get shot up from another hole that opens in the floor.
Dialogue:

Eppo will fall down another hole in the floor.

A staircase will open to the next room.

» Find your way into the vault.

Eppo will get shot up through the ceiling as the quest finishes.