This dungeon replaced the Ocean Mini-Dungeon as of the 1.14.1 Gameplay Update.

"No one is entirely sure how, but all ships that are laid to rest on the seabed all end up in the same place. From beyond the watery grave, these seafarers continue to manipulate the waves to meet their gains."

The Galleon's Graveyard, subtitled, "The Danger in the Depths", is a level 63 Dungeon. The dungeon can be access by traveling to the Galleon's Graveyard island from Selchar's V.S.S. Seaskipper. The boss of the dungeon is Redbeard, a famous pirate captain known to have accumulated many treasures on his travels.

To gain access to the Dungeon the player has to complete the level 61 Dungeon Quest Redbeard's Booty, which is started by talking to Marston, a pirate who've collected a crew to go out looking for Redbeards treasure, inviting you to join them.

The first phase is a fighting challenge where you have collected 16 tokens by killing mobs and drop the tokens into the hopper for the door to open.

WARNING: There is a bug where you need to switch worlds or /class for the door to accept your tokens.

The second phase is a parkour challenge where you must reach the top of the room by being tugged by the Whirlpool mob to get from platform to platform.

The third phase is another fighting challenge where you must kill the Armored Pirate in order to advance. To kill them, stand on the pressure plates next to each cannon until the timer runs out. It will create a "heat seeking cannonball" which will damage the Armored Pirate. 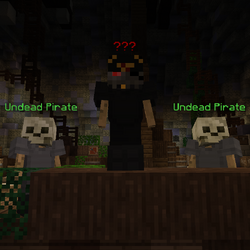 In the fourth stage, you will be put onto a pirate ship. The goal is the defend the ship using 2 different cannons provided to fight off the 15 oncoming enemy boats. The player's own ship starts with 10 health, and each enemy boat that makes it to the player's ship depletes one health. As such, the player needs to destroy at least 6 of the 15 enemy boats. Once the wave of attackers come, several boats will spawn in the water and you will need to parkour to the enemy boat. Once so, walk into the dark portal, and you will be in a long corridor. 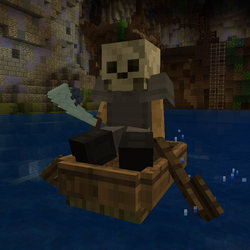 When 5 boats are destroyed: Dialogue:

When 10 boats are destroyed: Dialogue:

When 15 boats are destroyed: Dialogue:

On the left and right sides are doors. When you open one, you must rush to the Treasure Vault at the back of the room in 20 seconds, and collect the treasure. Once you've collected one from each room, drop the two tokens into the hopper to continue.

This is another parkour stage. There are 3 different parkours you need to jump through. You must jump across the 3x3 wooden platforms, which will break soon after stepping on them. The first one as a ground to it, so you can jump down and walk all the way to the end. For the second and third parts, you will be jumping over water.

The boss battle is Redbeard, with 750,000 health. Like the Armored Pirate stage, you must use the cannons to kill him. He has the special ability to pull him towards you. Skeletal Pirates will occasionally spawn in the arena.

The Dungeon Merchant in front of the Galleon Graveyard sells: