The Ghost Ship is a large ship south of Dead Island. The only way to get on the ship is by climbing 1 of the 2 ladders on either side which may be difficult due to mobs spawning near the edge of the boat, including skeletons. It is filled with large amounts of level 45 Dead Pirates. It is involved in the Ice Nations Quest where you must retrieve an ancient treasure from the ship to bring back to the Nation. Due to location of the ship and difficulty of getting onto it is not a popular grinding spot. 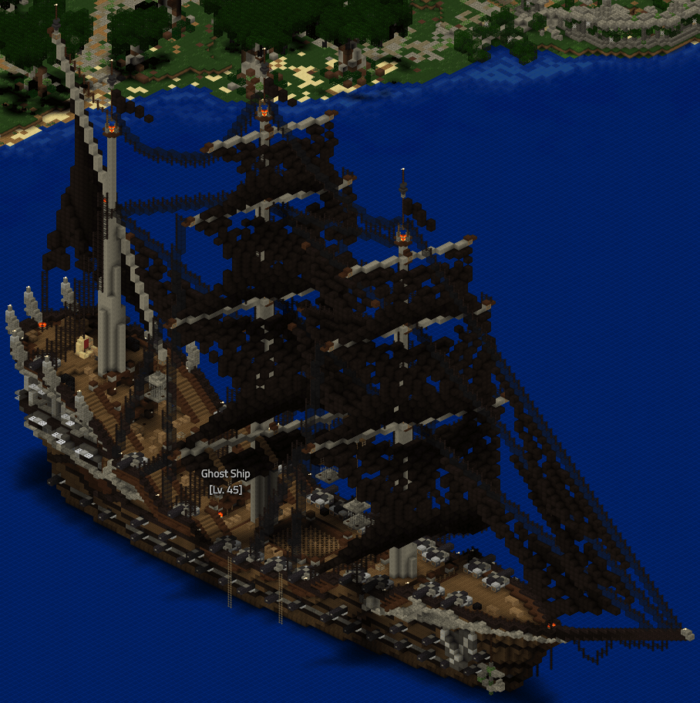 The ship has 5 levels to it.

The deck is the top level of the ship and looks like the deck of a ship including a helm made using multiple item frames in one space with all wooden pickaxe rotations.

The next level houses access to the cannons on the sides of the ship and has bunking rooms for the pirates.

The 3rd level is just a small room with a floor of fences which is dangerous due to being able to fall through and into the mobs of the 4th level.

This level has a dining table with some cargo boxes near each set of stair near each end of the boat.

This level starts with some cargo with a large staircase down to a small wooden table with a cup and plate with a large wooden chair behind it. The Captain spawns in front of the table, he is level 50 and drops the ancient treasure the item needed to complete the Ice Nations quest.