The Greenskins are a group of species inhabiting the western Gavel Province and the Canyon of the Lost, in the east of the province. All Greenskins have a generally greenish skin colour. They often lack in magical potential and intelligence, but make up for it with their typically high physical strength. This category of species includes Orcs, Trolls, Ogres, Goblins and Hobgoblins. Sometimes, Gerts are included within the definition, though they are a separate species (if they can even be considered a species).[1]

The Greenskins mainly live in the Llevigar Plains, which has been their home for an unknown amount of years. However, they probably predate the Villagers in the regions, as the Villagers only conquered the west some centuries ago during the royal Villager rule of Gavel.[2] The Orcs and Goblins, the main Greenskin species in the Llevigar Plains, have several camps spread out across the plains.[3][4]

The Orcs are the most common type of Greenskin seen in the game. They are a warring species with a clear military hierarchy, and have been an issue to Villagers for some time, with both species making multiple attacks and operations against each other. However, recently, the Villagers and the Orcs signed a ceasefire which continues to this day.[4]

The Villagers usually think of the Orcs as very stupid, though there are a couple cases where this is proved more or less false: the Orc Chief Gregg'r was able to steal the runic Fire Axe of Llevigar from within the homonymous city, although he was not able to use it.[4] Orcs are mainly found in the Llevigar Plains and Pre-Light Forest. In the plains, orcs are split into multiple camps, each with their own color, leader and name. A list of all the camps is found below:

Additionally, the Orcs own a large fortress in Pre-Light Forest called Leadin. Currently, the structure has no gameplay purpose as the quest involved with it, A Fighting Species, was removed in 1.20. Recently, the Orcs have also taken over a Villager fortress in the Olux Swamp set to monitor the Orcish capital.[5]

There exists a well-known and powerful Orc known as Gorgu, who is the leader of the Leadin fortress and possibly the entire Orcish armies, with whom the Villagers signed the ceasefire that put a temporary end to their hostilities. He is mentioned in Blazing Retribution, and he was a character in A Fighting Species, so it can be assumed that Gorgu will later have an appearance ingame.

The Trolls are a powerful type of Greenskin inhabiting the Canyon of the Lost. Common Troll body attributes include a dark green skin and different sized eyes. As seen in the Canyon, most Trolls tend to use axes as weapons. Their hair is commonly traded and bartered in the Thanos Bazaar.[6] The Dwarves of Thanos have also captured a giant Troll and are using it to protect their vault, which contains all of the city's riches.[7]

The Ogres are another type of physically powerful Greenskin, found in Llevigar Plains, Olux Swamp and even the Canyon of the Lost. Ogres are independent individuals, and prefer to mostly live alone.[8]

The Goblins are small in size, and do not have as much physical strength as any of the previous Greenskins listed, but they make up for it with their higher intelligence.[4] They are found in Llevigar Plains and Olux Swamp. Goblins are allied with the Orcs in the war against the Villagers, and even share some camps in the Llevigar Plains. A list of Goblin camps is found below:

Lastly, the Hobgoblins are a variant of Goblins living in the Canyon of the Lost. They are intelligent, possibly the most intelligent species of Greenskins, and mostly peaceful, living mainly off of farming instead of hunting. They have even expanded to more advanced skills such as casting magic and properly mining.

In the far southeastern Canyon, there exists a certain group of hoarding Hobgoblins, whose main base is found inside a large pine tree. They collect anything that they can find, including all the loot from those that get lost and die in the vast Canyon.[9] 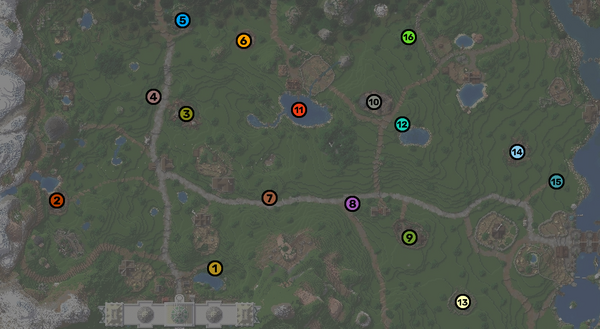 Not including the Orcs and Goblins that wander the Llevigar Plains, there are a total of sixteen camps inhabited by the two species across the region. Not all of these camps are hostile to players, while some are found in underground caves or other out-of-the-way locations. Several of them are involved in Quests following the Greenskin-Villager conflict in the region, Clearing the Camps and Blazing Retribution.

The map to the right shows all of these camps marked and numbered, to be referenced in the table below (click image to enlarge).