This dungeon has a corrupted variant; see Corrupted Infested Pit.

"Previously a natural cavern on the outskirts of Nivla forest, it quickly became the largest infestation of arachnids the province has ever seen. Those who enter are never found again."

The Infested Pit, subtitled, "Can you hear them whispering?", is a level 18 Dungeon, located near the Nivla Woods in a large spider infested cavern. The boss of the dungeon is Arakadicus, an arachnid looking to devour anyone who enters her cavern and feed her brood with their remnants. The entrance to the cavern is covered by a giant web, which prevents the player from entering. To remove the web, the player has to complete the level 14 Dungeon Quest Arachnid's Ascent, in which the player is sent by Captain Enduyn to collect a bucket of lava which is used to burn the web.

The Dungeon is located in the northern most tip of the Nivla Woods, beneath the south side of Mt. Wynn.

Be careful doing the quest to unlock it with other people, loading the lava for the final parkour sometimes glitches out, leaving you trapped in an invisible box. You would be stuck until the next person starts the quest.

The first room is a short tunnel, with a hole at the end that leads to the other room.

In this room you have to collect 26 Tokens by killing the mobs in the room and drop them into the hopper to open the door. The room contains Spider Eggs, which hatch into Newborn Creeplings when attacked.

The next room consists of a parkour challenge where you use the jump pads to get to the next platform. After beating the parkour and walking down the hallway you will enter the next room.

The room after the parkour has a man hanging in some webs. 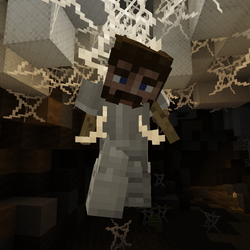 You will then reach the third phase by getting launched by the webs. You do so by standing on the pressure plate in the middle of it.

The next room is another battle phase. You have to collect 20 tokens to drop them into the hopper at the end of the path.

The next room is another parkour challenge with jump pads.

After beating the parkour you walk on a bridge to get to the boss room.

Arakadicus is a level 25 spider which summons 'Arakadicus Children' as her minions. She has an ability which puts webs at the players' feet to trap them.

The boss room contains a door that the player can close by dealing damage to the door; if the door is not closed, spider minions will come out of it. These minions can easily overwhelm the player if not handled quickly.

The Dungeon Merchant in front of the entrance to the Infested Pit sells: