Legendary Island is a location that offers a unique challenge for players that are up for it. The challenge was inspired by The Qira Hive and Tower of Ascension, however, it differs in that it is not a quest. In the challenge, the player must face off with 10 recreated, mechanized versions of classic bosses. However, if you die, you are sent to the beginning, and you have to start over. You have the choice of forfeiting early, but you won't get as much of a reward. Be mindful, though, as the entry fee costs 12 Emerald Blocks, and if you forfeit early, you may have just wasted your money. The Seaskipper captain notes in one of his dialogues that Dr. Legendary's first name is Herbert. 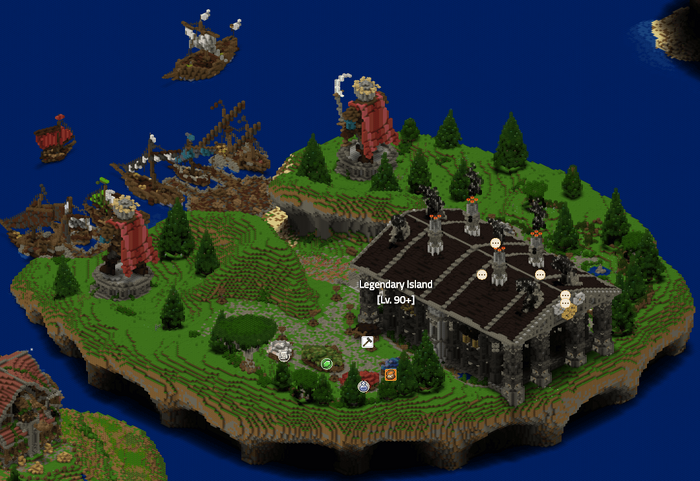 The Legendary Rewards Market offers rewards for players who have participated in the Legendary Challenge. It sells powerful accessories of each element, including multi-element. The accessories split up into tiers; Bronze, Silver, Gold, and Diamond. If you're going for a necklace, buy the Bronze Basic Necklace. A similar rule applies to the other accessories. You can add elements to the accessories from there. To buy a Silver reward, you must first buy a Bronze reward. To buy a Gold reward, you must have a Silver reward of the same type. Note that rings cost half as much as the others.

As mentioned before, the entry fee to take on the challenge is 12 Emerald Blocks. Once you enter the first challenger's arena, there is no going back unless you die or kill the boss. With that being said, you should bring many potions just in case, and perhaps some skill boost potions as well. Don't worry: there is a warm-up room right before every boss fight. If you ever run out of potions, you can restock here. The warm-up room consists of an Emerald Merchant, a Powder Master, a Potion Merchant, a Blacksmith, and a Weapon Merchant. You have an opportunity to leave during the warm-up phases and claim a lesser prize. Furthermore, you can also switch classes or even leave the server whilst in this room and your progress will be saved.

If you manage to fully complete the Legendary Challenge, you receive the following: