Over two hundred years ago, Lexdale found itself under constant attack by the Gerts, an Orc-like species which lived far from the Orcs' usual home in the Llevigar Plains. When the citizens of Lexdale sent a letter to Cinfras to ask for help, they only received a small platoon of soldiers which was quickly wiped out, as the Gerts kept procreating and overrunning the Villagers' forces. Eventually, the government of Cinfras had had enough of the Gerts and declared war against them, winning the war thanks to an expert strategist named Norler. The Gerts were promptly pushed away from Lexdale and into the Gert Camp.[1]

However, that wasn't the end of Lexdale's problems, as soon after, the Parasite of Darkness burrowed within the ground and created a nest near the city in a decayed stump, giving birth to many Dernmites which spread the Decay around Northern Gavel.[2]

Being the closest city to the Parasite's nest, Lexdale was the most badly hit town in Gavel, the entire environment warping into a husk of its former self. As if that was not enough, the Lexdale Federal Prison nearby started arresting innocent citizens from Gelibord and Lexdale and killing them, as a ploy for Dullahan to obtain more souls to feed himself with.[3]

Lately, out of fear of the Decay and general paranoia, the town has also started persecuting and burning so-called "witches", accused of being responsible for spreading the Decay. However, none of the citizens know the true reason behind this plague's existence.[4] 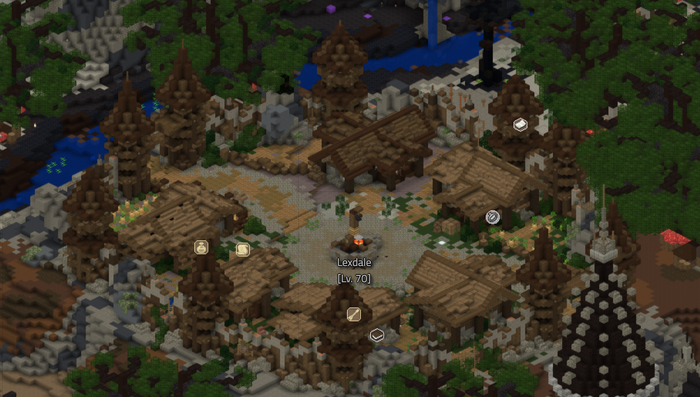