Llevigar is a major city in the Gavel Province as it is the first players encounter upon entering the province. It is a key port and a good place to rest before traveling ahead into the slightly less hospitable plains outside of the city, not to mention a nice place to stay. The city itself has a mirrored design and is incredibly complex, with its upper levels containing numerous towers, spires, and domes, each of which hold numerous rooms full of many more secrets, such as records of various locations across the land and concealed prisons for holding the province's dangerous enemies. It is one of the richer towns in Gavel, far larger and many times grander than its nearest neighbor, the crumbling and aged town of Olux in the swamp.

Before the mages of Mage Island calmed the waves of the Ocean a hundred years ago,[1] Llevigar was most likely a simple, small city near the Gavellian coast. Officials from the city would often send out miners to excavate emeralds around the Llevigar Plains,[2] however, as emerald deposits ran dry and the Decay began approaching the city, the citizens of Llevigar became desperate and, once ocean travel became possible, set sail across the Ocean, where they found Wynn.[3]

The Villagers soon made an alliance with the Humans of Wynn and, as adventurers and traders from the new province approached Gavel, Llevigar was rebuilt using quartz from Karoc Quarry, turning into a massive city of quartz and the icon of the province, even hosting an university and a library.[1]

However, the abundance of quartz in the city has also led to some malicious experiments on their nature, and attempts to weaponize the mineral. One of these experiments, Project Quartron, seems to be run by corrupt officials from Karoc Quarry and Llevigar, in an attempt to create a quartz-powered robot.[4][5] 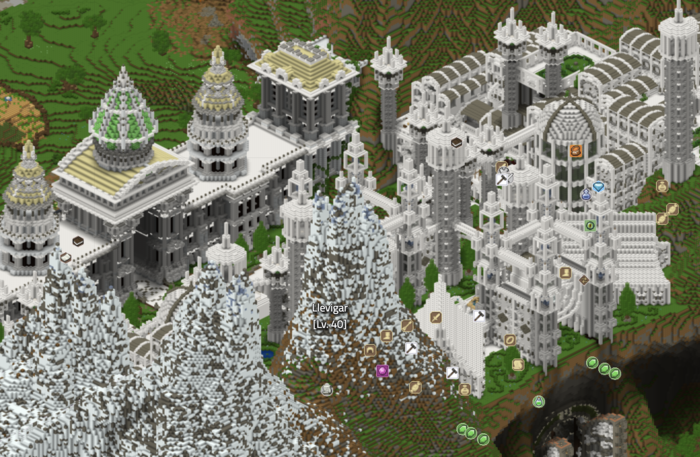