The Hallowynn Quest was a quest only available during Halloween 2014. For Halloween 2015, it was remade into a full quest instead of a limited-time one, and was renamed to Macabre Masquerade. It is a short level 21 quest.

For Halloween 2016, another Hallowynn quest with the name A Grave Mistake was made. 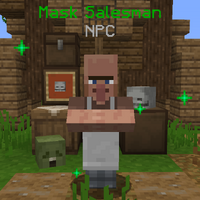 There is a brief parkour at [-370, 25, -1983]. The parkour is impossible to complete, and failing it will transport you to a room with another parkour. Climbing up the wooden platforms will put you on a ledge with a minecart rail. Go to the end of it, then climb up some more wooden platforms, and go to the end of the next ledge to enter the next room.

You will be transported to a large chamber with three doors next to each other; take the left door.

You will take mild falling damage and arrive in the room with the haunted mask. After you defeat the Haunted Mask, you will be able to go through the exit.

When you are transported out, you will be returned to the start of the parkour and can simply leave. You do not need to try to cross it again.