Preparing for the Raid[]

To challenge the Nexus of Light, you must assemble a party of 4-6 players. Each must be at least level 79, and must have unlocked the Raid by completing the Realm of Light V quest. Otherwise, one of the most important considerations when assembling your party is your combined total combat level, which cannot exceed 500.

The entrance to the Raid is inside the Nexus of Light's palace, on the northeastern edge of The Realm of Light. There is a quick-travel portal to the palace at the Realm's entrance, unlocked after the quest, along with a Potion Merchant selling Healing Potions from Lv 80-100, Lv 80 Mana Potions, and Lv 85 Skill Potions. However, there are also other amenities in the Nexus of Light, including a Potion Merchant, as well as a Blacksmith, Emerald Merchant, and 2 Party Finders for Lv 80 to Lv 100 players.

To begin the Raid, enter the palace and the party leader will have to hand 3 Uth Runes to the Raid Keeper. Uth Runes can be obtained from Uth Shrines around the world, which require a Golden Avia Feather to activate. They are dropped by the miniboss of the Uth Shrine, the Uth Guardian.

When you enter the raid, the cutscene shows the outlook of castle, before the door opens. Upon entering, you're greeted with title "Orphion's Nexus of Light/Dark, Where Darkness grows/Light fades", and you spawn in a giant hub with 3 doors. The door on the front will open, leading you to first room.

There are five clouds, and you are given jump boost. Every round, a platform will be created on one cloud while the others will decay. Players should stand on the platform to tick the countdown. A new round will create after a while and you have to repeat until the challenge is completed. Standing on the decaying cloud while the platform is activated will damage the player.

There is a tower platform in the center. You can get there by stepping on gold launchpad that appear on the corners of the room, then you need to stand on the tower platform for 60 seconds total. Occasionally, some of the crystals on the edges of the room will start decaying, and your party has to stop them from decaying by killing the parasites beneath them. If the parasites are not killed in time, the tower will decay, knocking off the person standing on it, and disabling the platform for five seconds.

There are clouds similar to Decaying Clouds Room in Room One. In this room, 3 clouds will eject a black beam, indicating where the Crystalline Decay will spawn next. You have a timer for 30 seconds to kill all the Crystalline Decay each round. If you fail, the round doesn't count to the three rounds you have to do to complete the challenge.

There is a collector in the middle, you need to get 10 resources to it.
Miniboss - Kill the miniboss to get resource.
Parkour - Complete the parkour by looking at gold blocks on ceiling.
Puzzle - Stand next to the Light Crystal 3 separate times to get the resource.

If the crystal carrier dies, the challenge resets, allowing another player to pick the crystal and proceed. 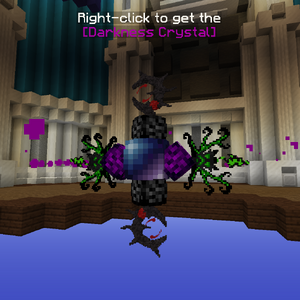 One player will hold the Light Crystal, making them the escort in this challenge. The path on the floor will be visible to the escort and no one else. The escort should lead other players to the end by having their others follow them. Additionally, the overseer regularly decays for 4 seconds. You should not move in this period, or you'll take damage and get launched to the air. Movement spells are disabled for the entirety of this challenge, making the overseer especially dangerous.

If the escort dies, the challenge resets, allowing another player to pick the crystal.

When you complete all 3 rooms, a gate will rise in the center. Once you enter the gate, you will be presented a stairway to Orphion's arena, for the team to face against Orphion, The Light Beast, subtitled, The Light Beast and The Dark Beast.

Orphion, The Light Beast, with The Parasite attached to the body, appears as the fake final boss of the raid. He has 8 million health, and uses various spells.

At the start of the fight, there will be an unkillable Crystalline Cyclone mob in the middle floating above the arena.

The Crystalline Cyclone initially has power to 'crystallize' a player. If you are crystallized, you will first notice you slow down in the fight, and then eventually stop in a crystal prison. The only way to be freed of the Crystal is for another player to kill the Crystal imprisoning you. When trapped in the crystal, you are rendered immobile and cannot attack or use spells. It will also gain new spells as the fight progresses:

Lots of minions will also spawn as Orphion's health gets lower. Some of them can cast heal spells, so deal with them quickly.

After Orphion's HP has been reduced to 80000 or below, everyone will be taken to a cutscene, showing the black matter around Orphion detaching itself, and the Crystalline Cyclone turning into the Sanitizing Void, as Orphion says to the players:

Phase 2, The Parasite, The Harbinger of Decay[]

The Parasite is the true final boss of the Raid. All of the minions during Orphion's first phase will disappear, and the Bloodlust Ruins will be inactive throughout the fight. The Parasite is a fairly simpler fight compared to Orphion's, though it has large health regen and high knockback. However the main threat to the fight is the Sanitizing Void.

The Sanitizing Void does not target the same player for more than once.

Once The Parasite has been defeated, Orphion's Nexus of Light will be completed. After the message has popped up, Orphion will then speak to the Players.

After each of the three Challenge Rooms, you will be able to choose one of three randomly-selected powerups, increasing in tier from I to III with each successive challenge. Note that each set of powerups to choose from is independently randomized, so being offered a specific Tier II powerup in the second room will not necessarily mean that the corresponding Tier III will be available in the next room.

For further information on the Major IDs provided in some of these powerups, see the Identifications page. Inside the Raid, you can right-click each powerup to see a description of their effects.