Poisoning the Pest is a medium-length level 2 quest centered around a farm north-east of Ragni.

Farmer Cevalus needs the player's help in destroying a corrupted pest plaguing his farm. The player is tasked to poison the farm in order to get rid of the farmer's corrupted father. 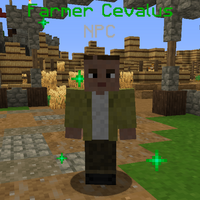 » Take the [1 Crate of Rat Poison] and enter the farm
If you talk to Farmer Cevalus now, he will say:

After you do this, the corrupt farmer will shoot fireballs at a greater rate.
You will be unable to leave the farm without activating the sprinklers.

» Exit the farm and talk to farmer Cevalus