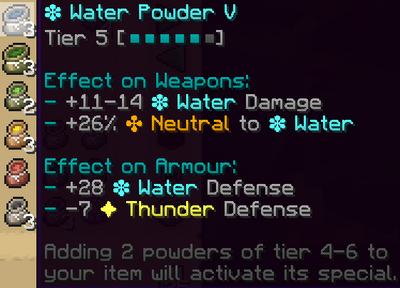 Powders are magical items used to improve armour and weapons. They are based around one of the five Elements in Wynncraft: ✤ Earth, ✦ Thunder, ✽ Water, ✹ Fire, and ❋ Air. There are six tiers for each of the five types of elemental Powders, with Tier 1 being the weakest and Tier 6 being the strongest.

When applied to a weapon, Powders add a certain amount of elemental damage, as well as converting a portion of the natural ✣ Neutral damage of the weapon into elemental damage. When applied to armour, Powders boost defense to their respective elements, but carry a penalty to defense against another element. The number of Powders that can be applied to a given item is based on the item's Powder Slots; adding multiple Powders causes their bonuses to stack.

For a comprehensive table of statistics for all thirty Powder variants and tiers, see here.

The primary methods of obtaining Powders are from mobs, most of which will occasionally drop low-tier Powders, as well as from Loot Chests. Tier 4 Powders and lower can be found in all Loot Chests. Tier 5 and 6 Powders can only be obtained by upgrading them at a Powder Master or by trading with other players.

Similar to the Emerald Imp, there are five variants of Powder Spirits, one for each elemental Powder. Spirits are somewhat rare, but can be found throughout the world, and if they are killed before they run away will drop several Powders of their respective element from Tier 1 to Tier 3. Elemental mobs called Flarelings are also very rarely found in the Molten Heights; similarly to Powder Spirits, Flarelings drop various Powders of their element up to Tier 4, though they are hostile.

Four Tier 4 Blank Powders are also given during The Envoy Part I.

A powder special is unlocked on a given weapon or armour piece when two Powders of the same element and of at least Tier 4 are applied to that item. Each element has unique themed special effects which differ between weapons and armour, but which provide useful bonuses and abilities in combat. Specials cannot be unlocked on items with fewer than 2 Powder slots, and only one special can be unlocked per item.

The numbers described below are the respective maximum values of each bonus for any given special. Keep in mind all powder specials (armor and weapons) are additive, so they are like the elemental damage ids you'd see on armor.

When a special is unlocked on a weapon, it will charge up while in use, shown by an indicator near the bottom of the screen. When the indicator reaches 100%, you are able to Shift-Click to activate the weapon's special.

The following maximum values are based off of the effects of double Tier 6 Powders, or the highest tier of weapon powder specials.

When Powders are applied to armour pieces, the special effects are passive, rather than being activated. You can put armor specials on each piece of armor, meaning that at max, the effect of any armor special may be multiplied by four.

The following maximum values are based off of the effects of double Tier 6 Powders, or the highest tier of armor powder specials per armor piece.

Use as Crafting Ingredients[edit | edit source]

In addition to their regular use, all Powders can be used as Crafting Ingredients as of the 1.18 Economy Update. Powders can only be used in the Weaponsmithing, Woodworking, Armouring, Tailoring, and Jeweling professions. They cannot be used for crafted consumables.

When used as a crafting ingredient, Powders apply their effects similarly to how they would normally. However, they also add a durability cost, and higher-tier Powders will add skill point requirements on top of durability.

The Powder Master is a special merchant found in most major cities who allows the application and manipulation of Powders. It has three main functions, all of which require a certain amount of Emeralds per transaction:

Powder Masters generally also have at least part of the Powder Manual, a three-chapter book which explains many of the mechanics around Powders.

The Powder Exchange is a market located in Corkus City that allows players to trade Powders of Tier 4 or higher for Powders of the same tier but of a different element, for a fee.