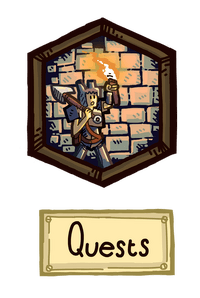 Quests are a relatively old addition to Wynncraft added in the 1.09 Quest Update. They allow you to pursue missions in which you help NPC's around the world, and in return for doing quests, you receive rewards such as Emeralds, Experience Points, and Quest Items. Quest items may be needed for future quests such as Temple of the Legends and Reincarnation. Quests can be viewed by right-clicking the Quest Book in your inventory. All the quests are listed in the following order: Started Quests, Available Quests, Quests that cannot be started due to the level requirement, and Completed Quests.

Quest difficulty ranges from Easy to Medium to Hard and represents both the skill and danger involved in completing the task. For example, the quest Enzan's Brother requires you to walk out of Ragni and to the Nivla Woods, while the Jungle Fever quest asks you to cross the map multiple times and face dangerous mobs.

Quests have different stages called objectives, which can be viewed from your quest book. When you start a quest the quest book will automatically update, and you should be able to see the new objective on the corresponding quest page. Once you complete an objective a new objective will automatically appear and update your quest book. Once you complete all the objectives you will be greatly rewarded with any number of items usually being Emeralds and a Quest item which is the server's equivalent of a trophy. Most of these trophies will be needed for future quests (so don't try to glitch them out of your inventory). If you happen to glitch them out, use /fixquests to have then returned to your inventory.