Rodoroc is a city where many Dwarves dwell, and is located in the Lower Molten Heights. The city is the capital of Molten Heights. Rodoroc's "partner town" is Maex, also home to Dwarves of many kind. Rodoroc is ideal for many high level players because of the Dwarves and Doguns questline, grinding spots such as the Freezing Heights, and a popular loot run route.

In 100 AP, the Dwarves arrived in the Molten Heights from the Canyon of the Lost, having escaped the Villagers.[1] They found an abundance of ore and diamonds in the region, and started digging the valuable resources out. However, they soon started competing with the Doguns over the living space in the area, and eventually waged war against them, starting the Dogun War.[1]

During the war, the Dwarves massacred the Doguns, and the Dragons who sided with them,[1] chaining an Ice Drake and forcing it to freeze an entire Dogun town.[2] Only one dragon was able to survive through the war, while all the others were hunted down.[3]

Eventually, after 200 years, the Dwarves were able to defeat the Doguns after they stopped the Doguns from summoning the ancient fire demon Garaheth. The Dogun capital, Courag, was also destroyed.[4] After the end of the Dogun War, the Dwarves founded Rodoroc, a great citadel that serves as the capital of the Molten Heights even today.[1] 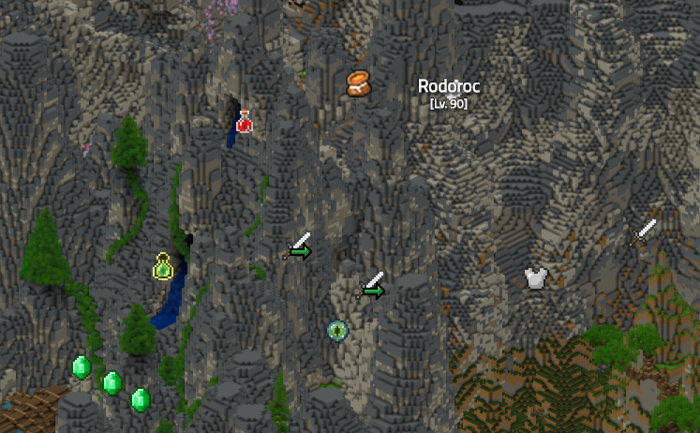 There is a tunnel Southwest of the city that connects Rodoroc to Thanos. In the cavern to the Library of Flames, there is a small cave on the right that leads to Thanos. It is unlocked during the quest Dwarves and Doguns Part II

The Juggler also gives a one-way fast travel to Rodoroc, accessed by the Juggler's Tavern in Cinfras