Runes are trading items used throughout Wynncraft for various outputs.

The Runes' origin is unknown. However, the magic they possess is very peculiar and was used by many people over the ages. Furthermore, each type of rune seems to have a different magical inclination[1]. The runes' main property is the ability to manipulate time[2] and space[3] at will. The two known main groups that used runes are the Olm and the Ancient Civilization of Gavel, the latter of which we have very little information on. 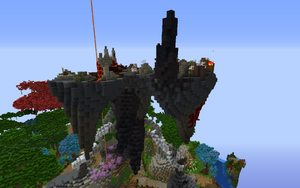 This ancient civilization inhabited the entirety of Gavel, from the Llevigar Plains[4] to the Sky Islands[5]. It was most likely a Villager civilization, and it made heavy use of runes: the Plains Guardians of Gylia Plains[6] and the strange ruins in Llevigar Plains being some examples. At an unknown point in time, which was stated to be "ages ago"[3], this civilization combined the Nii, Az and Ek runes for study purposes. However, the experiment went awry, and caused a reaction that resulted in the civilization's collapse[7]. The reaction also made a fracture in spacetime and created the Forgery, which draws its power from this fracture[3]. After the collapse of this civilization, the enigmatic Rune Guardians started appearing in Gavel to protect the runes[1].

The Olm also made extensive use of the runes: they are most likely the source of their time magic, and the Time Valley was built with tools that were covered in runes[2]. They also built a Tol Altar under the Cathedral in their city. The full extent of their rune use is unknown.

The Twains used at some point runes to seal the Corrupter of Worlds in its cave next to the Temple of the Legends[8].

A Nii Rune is found by killing Nii Guardians that mainly spawn around level 75-85 areas, such as Lexdale, The Forgery, and the Canyon of the Lost. They can sometimes be found inside the Light Forest. It is the first type of Rune to appear in the game and is used for exchanging Powders and forging Dungeon Keys.

Nii runes can be used at The Forgery to forge corrupted Dungeon Keys for the Corrupted Decrepit Sewers, Corrupted Infested Pit and Corrupted Lost Sanctuary Dungeons. The keys are made with the Nii rune and the dungeons respective broken key, which can be acquired from their respective Key Guardians. Nii Runes can also be used alongside any Tier IV Powder at the Powder Exchange to gain a Blank Powder IV.

The following merchants use Nii Rune:

An Uth Rune is found by killing the Uth Guardian that spawns during the Uth Shrine's challenge at Aldorei Town or the Avos Territory. It is the second type of Rune to appear in the game and is used for exchanging Powders and forging Dungeon Keys.

Uth runes can be used at The Forgery to forge corrupted Dungeon Keys for the Corrupted Underworld Crypt, Corrupted Sand-Swept Tomb and Corrupted Ice Barrows Dungeons. The keys are made with the Uth rune and the dungeons respective broken key, which can be acquired from their respective Key Guardians. Uth Runes can also be used alongside any Tier V Powder at the Powder Exchange to gain a Blank Powder V.

The following merchants use Uth Rune:

The Tol Rune can be obtained at Tol Altars. There is one in the Sky Islands that allows the player to throw 6 Nii runes or 3 Uth runes on top. After they are thrown, a short animation will play when the 3 Uth/6 Nii runes will fuse to 1 single Tol rune. After finishing the quest The Olmic Rune, a Tol Altar in the Ruined Olmic City is unlocked. It offers a cheaper price, requiring 4 Nii runes or 2 Uth runes instead.

It is used to craft Dungeon Keys for the Corrupted Undergrowth Ruins.

The following merchants use Tol Rune:

As of 1.20 the Az Rune can be found around Olux Swamp by killing uncommon Az Rune entities and completing the subsequent minigame. Six runes also received upon completion of the quest Realm of Light I - The Worm Holes.

The Az Rune can be used to access the Nest of the Grootslangs Raid.

Unconfirmed Upcoming Content
The following page contains information about content that is currently not implemented in Wynncraft, but is hinted at to be added in the future with no official confirmation.

The Ek Rune is the only rune that has not yet been implemented in the game. Its texture and name can be found inside the official Wynncraft resource pack, and the rune is mentioned in the item lore of Az. In addition to this, an Ek rune is seen in the Secret Discovery Spider Ruins, and is mentioned by Gregg'r in Blazing Retribution.

The Ek rune is also seen on Mob Totems and the Tome menu.