Saint's Row, also known simply as Nemract Cathedral, is a large cathedral and the nearby graveyard, located across the river east of Nemract. The area is owned by Sayleros, who lives in Detlas, and is the burial site of his recently deceased brother. In order to gain access to the graveyard, players must first be given access by Sayleros after completing the Grave Digger quest, in which they must retrieve the Dusty Will for Sayleros by killing his undead brother. 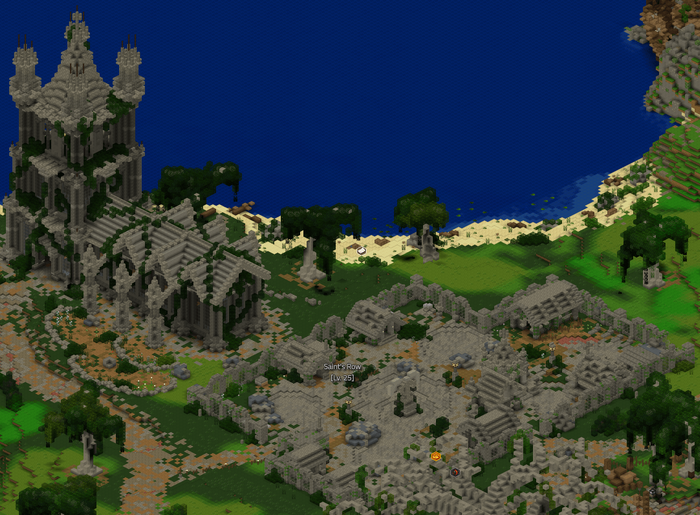 The cathedral is devoted to the Bovemist religion, and houses The Priest as well as many passive Bovemist Followers. The crypt beneath the cathedral is home to the undead Sayleros' Brother, and is unlocked during the Grave Digger quest. The cathedral is also guarded by a pair of level 30 Blessed Golems, which protect it from the Zombies and Skeletons that roam outside.

The graveyard is a good grinding spot for players of level 20-27, and is home to large numbers of level 21, 23 and 25 Skeletons, as well as the occasional level 12 Remains of Skeleton and several loot chests. The level 30 Zombie Cow miniboss also spawns in the centre of the graveyard; this creature can move quite quickly, and is also able to cast the Weakness spell over a wide area, reducing the strength of your attacks.

This section is transcluded from Lists of mobs/Saint's Row § Surface Mobs. (edit)

This section is transcluded from Lists of mobs/Saint's Row § Rare Mobs. (edit)