Selchar is a town located on an island in the Ocean off the shore of Nemract and was added as a part of the "Ocean" update. The city has one bank with many merchants. A Weapon Merchant, an Item Identifier, Blacksmiths, a Treasure Merchant which buys treasures, and a Scroll Merchant can be found. Unfortunately, it doesn't have a Liquid Emerald Merchant or a Powder Master.

The town features three islands connected by two bridges, and speckled with caves on the sides with few chests. It is a great city to use the V.S.S. Seaskipper for quests, and dive in the reef to get some blocks of emeralds.

In 970 AP, Selchar was founded and inhabited by Humans and Villagers alike long after the mages of Mage Island calmed the waves of the Ocean. It quickly became the center of trade in the region, having one of the busiest ports in the world. Shortly after its founding, however, the city's government refused to allow the mages to establish a magic academy in the city, forcing the mages to relocate it elsewhere, on an island now known as Grookwarts.[1]

Lately, the city has also garnered the attention of envoys from Corkus, who are trying to get Corkus recognized as a province from the other provinces of the world, due to the city's position as the crossroads between lands. They have also established a travel system between Selchar and Corkus through a ship named the C.S.S. Wavebreaker.[2] 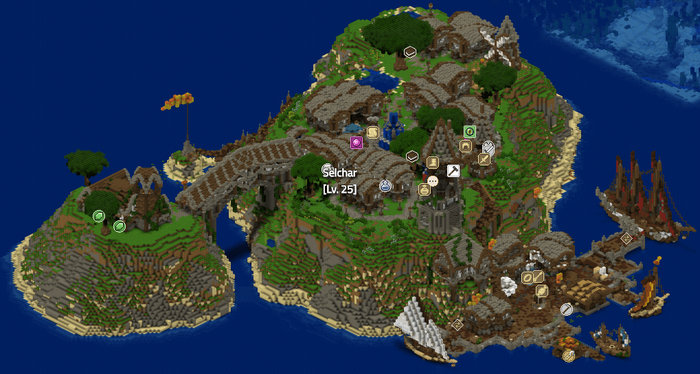