The Shaman is one of the five playable classes in Wynncraft and uses a Relik as its weapon. Its base resistance is 50%, making the Shaman the least tankiest class in the game. However, the Shaman excels at crowd-control due to its high area damage and mob control, and can provide valuable support to itself and others with healing and damage boosts.

The Shaman's main attack fires three bolts, one going straight and the others going to the sides, each dealing 33% of the main attack's damage. The bolts spread out over a distance, so enemies close up take the most damage.

The Shaman's first spell, Totem, provides area damage, buffs the damage of nearby players (35% damage buff to the player holding the totem, and a 15% damage buff to allies), and can even heal players once upgraded. Totem is the Shaman's most vital spell, as the class's second and third spell require an active totem to function. The totem has a 20 second duration that despawns once it runs out of time. Some Major IDs can affect the way the Totem spell works, too.

The Shaman's second spell, Haul, is a mobility tool that launches the player towards their totem. At higher levels, its cost becomes very cheap which makes it good for spell cycling, spamming certain spells in a repeated pattern, and the spell can damage and knock upwards nearby enemies where you land.

Its third and most powerful spell, Aura, fires a wave of particles out from the totem that damages anything in its path in a circle around the totem. Mobs hit by Aura will be pulled towards the totem, barring mobs with Knockback Crowd Control Immunity. This covers a very large horizontal area and can even trap mobs at higher levels, making them unable to escape.

Finally, the Shaman's fourth spell, Uproot, is a ranged blast that can pull enemies toward you, freeze them, and even reposition your totem. Its final upgrade, at level 66, allows it to push entities instead as well as refresh the timer of your totem.

Shaman's low base resistance is made up for by its long range, healing, and crowd control and damage.

The Shaman's main attack fires three bolts in a frontal arc, each bolt dealing 33% of the main attack's damage, after all damage-boosting calculations. Like other classes' main attacks, the bolts can pierce through mobs and deal damage to multiple enemies. Enemies up close will be hit by more bolts and suffer more damage, while enemies further away will only take 33% of the damage. The bolts go through blocks and have a range of ~30 blocks. Attacking again while an attack is already out will cause the older attack to disappear. 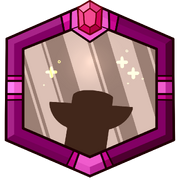 The Totem spell is the Shaman's most important spell. When cast, a totem is tossed out in the direction the player is facing. You can change the direction you face to alter the trajectory of the totem. Once it lands, the totem will activate and its 10-block radius area of effect will be outlined by green particles (or white particles if you are a Skyseer). All mobs standing within its area will be damaged each second. The Shaman gains a +35% damage buff while standing in their totem's area of effect, while other players gain a smaller +15% damage buff. The totem has a 20 second duration that despawns it once it runs out of time. Swapping to a different item will also despawn your totem. The Shaman must have a totem up before being able to cast Haul and Aura.

The totem's strength effect also persists for 2 seconds after you leave its area of effect. The totem has no proximity limit to the player, so you can go any distance away and it will still be active until it despawns. The totem also blocks projectile attacks from mobs.

The Shaman unlocks the Totem Grade II upgrade at level 16, allowing you and other players in range of your totem to be healed every second they stay within range. The healing per second is displayed above the totem, next to its timer, and heals all nearby players for 3% of the Shaman's maximum health. Like the Mage, the water damage % ID changes the amount of healing. Each percent of water damage % changes the heal by 0.5% of your HP, capping at 5.25% HP/second healing for +150% water damage. Having negative water damage reduces your healing, down to a minimum of 1 HP/second.

At level 36, the Shaman unlocks the Totem Grade III upgrade, causing mobs to take damage and be thrown into the air if they are caught in the area near your totem's landing spot. 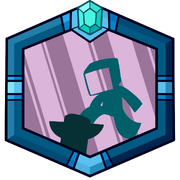 The Haul spell is the Shaman's movement spell. When cast, the player is pulled towards their totem's current position. If they do not have an existing totem, the spell will fail. The launch trajectory depends on the relative position of you and your totem, and can range from a low horizontal pull, to a high arc, to a straight leap upwards. Like other movement spells, Haul's momentum can be stopped by taking damage and also cancels fall damage.

Haul has no totem proximity limit, so you can go any distance away from your totem and still be pulled towards it when Haul is cast. Haul will fail to be cast if you do not have an active totem.

The Haul Grade II upgrade decreases Haul's cost and allows the Shaman to hurt and throw mobs when they land after using Haul. This is signified by a small bounce after you land. Swapping off of your relik while being pulled by Haul causes the momentum to be cancelled early, the bounce to trigger, and the fall damage immunity to be removed. You can use this to your advantage to increase your speed and be shot much further away than your totem.

At level 46, the Haul Grade III upgrade adds a heavy slow to Haul's landing damage and decreases its cost even further. 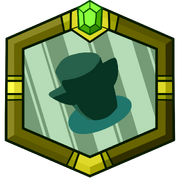 The Aura spell is the Shaman's damage-dealing spell. When cast, a wave of particles are fired from the base of the totem, extending to about 15 blocks in radius, damaging all enemies hit and pulling them back towards the totem. The wave can hurt enemies 1 block above and below it as well. The wave generated by Aura will disappear if you cast Aura again or swap off of your relik while it is still traveling. However, casting Totem or having your totem despawn does not cause Aura to disappear, and it will still damage and pull enemies towards its center.

Unlike Totem, Haul, or Uproot, Aura requires the player to be within a 24 block radius of their totem in order for Aura to be cast. Failing to cast Aura in this way will still spend Aura's mana cost upfront, unlike trying to cast Haul or Aura without a totem, which only spends mana after multiple failed casts. It takes 1.5 seconds for Aura to travel to its furthest point from the totem. Aura's spell multiplier starts at 200% near its center and decreases to 100% as it travels outwards.

The Aura Grade II upgrade at level 36 allows the aura wave to return to the totem after reaching its maximum distance, dealing damage and pulling mobs again. In total, it takes 3 seconds for Aura to travel away and then back to the totem.

At level 56, the Shaman gains access to Aura Grade III, which creates a small ring around the totem when Aura is cast and lasts until it disappears. While the enclosure is active, mobs who enter the cage cannot exit it, even if the mob uses a spell like Charge or Teleport. Mobs that have knockback immunity are unaffected by the enclosure as well as Aura's normal knockback. Like the wave itself, this cage will also despawn when you stop holding your relik but will stay in place while placing a new totem. 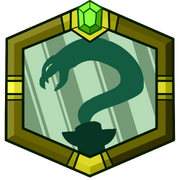 The Uproot spell allows the Shaman to reposition mobs and its totem. When cast, a fast projectile is fired, exploding on impact with an enemy or your totem. The explosion damages all enemies hit and pulls them towards the player, then roots them, preventing them from moving but not preventing attacks. Uproot can also explode on and affect your totem, moving it around with no harm done to the totem.

Uproot's blast can also travel through blocks and cannot explode on enemies who are too close to the player.

The level 46 Uproot Grade II upgrade allows you to change the direction of Uproot's blast by facing in a different direction as the projectile moves.