The Dark Descent is a long level 24 quest around the Underworld Crypt Dungeon and Ancient Nemract.

The Nemract army has figured out that a lot of the zombies in the area come from a skull in Ancient Nemract, but they need the player's help to figure out how to get in and stop the zombies from spreading. 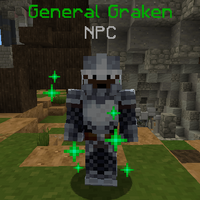 The floor breaks and the player falls downwards.

» Go through the tunnel in the basement of the house
You can see the glowing ruby as you reach the end of the tunnel, but you will fall down a hole and be transported before you can reach it.

The realm contains a gray/monochrome version of Ancient Nemract, with a few lost soul mobs scattered around. The only source of color is the giant tree around the skull that marks the entrance of the Underworld Crypt dungeon in the normal reality. There is only one path you can follow through the town, and as you go through it you will trigger multiple short cutscenes. 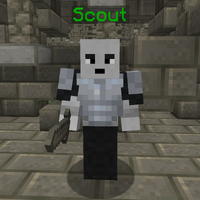 The scout will die and turn into a skeleton.

When you make your way to the dark version of the house in which you first entered this realm, you will be able to walk down into the basement. When you do, a group of spirits will rush out into the basement and dissipate, opening a hole in the wall that you can then pass through. 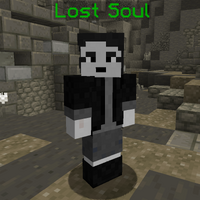 Charon, under the name "???", will walk up and kill the lost soul, then disappear.

Upon entering the shadow version of the area in which the skull lies, you will be confronted by Charon, still under the name ???. 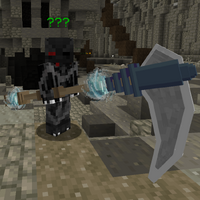 » Take the ruby from the eyesocket of the dark skull and leave the strange dark realm.
To get to the eyesocket, you must do a short parkour up some white platforms. You can then take the ruby by punching one block beneath it.
Dialogue:

You must continue down the tunnel until you fall and are transported to a copy of the first room of the Underworld Crypt dungeon. The doors in it will open; entering them will take you back to the normal version of Ancient Nemract.
Dialogue:

» Return the ruby to Graken