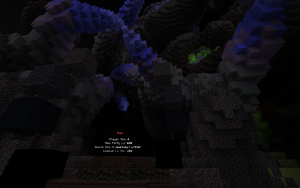 The Nameless Anomaly, subtitled "Beyond Void", is the upcoming highest-level Raid in Wynncraft. It was revealed in the Wynncraft 2.0 Update Trailer.

Like other Raids, The Nameless Anomaly is a team-based challenge, requiring a party of at least 4 players to complete. As it is designed for endgame players level 105+, the total combat level of all party members is capped at 600.

Preparing for the Raid[]

To take on The Nameless Anomaly, you must first assemble a party of 4 players. Each must be at least level 103 and have completed A Journey Further.

The entrance to the Raid is at the border between the Toxic Wastes and Void Valley, near The Gateway to Nothing. The nearest town is Lutho, where players can restock on potions, runes, and repair crafted gear. There is also a Tol Altar fairly nearby to convert lesser runes into Tol Runes.

Once your party is prepared, travel to the entrance, and the party leader will have to hand 5 Tol Runes to the Raid Keeper. Tol Runes can be obtained through converting Nii Runes or Uth Runes at a Tol Altar. Once the Runes have been given, your party will enter The Nameless Anomaly and be faced with your first Challenge Room.

The Nameless Anomaly uses two unique pieces of music, both of which introduce three new instruments: Bell, Guitar, and Flute.

Progressing through The Nameless Anomaly involves defeating three randomly-selected Challenge Rooms in succession. Each of these rooms involves a variety of cooperative challenges, including puzzles, parkour, and combat, that your party must work together to complete. If you die during a challenge, you will be able to spectate the rest of your party while they continue. When a challenge is completed, all dead players are revived; if too many players die at once, however, and you are consequently unable to complete the challenge, you will fail the Raid and be brought back to the entrance.

After each Challenge Room, you will enter a rest area where you can choose Power-Ups before tackling the next challenge; see the Power Ups section for details. It is advised you use these rooms to recoup and make a plan to face the next area.

One player must ingest the Berserker Berry, granting them the strength to be able to kill the Malefic Void Rifts, but afflicting them with the berry’s poison, making them unable to cast spells, slowed, and blinded. The players must protect and guide the player with the strength to the Malefic Void Rifts and destroy them all within 2 minutes, or the canyon floods with void and the raid fails.

Three minibosses must be defeated to get two of the four [Void Matter]s. One Dendrite Drifter and two Malformed Void Holes.

At the end of the onslaught of mobs, the Despairing Crawler will spawn. Defeat it for the final [Void Matter]

One player with The Light must guide the rest through a dark cave at the cave’s entrance. Throughout all three rooms, players must stay near the Lightbearer or they will begin to be devoured by the invisible aberrations that stalk the cavern. In the first room, players must locate three Shadowlings to open a side path where the Lightbearer will stand on a Pale Shrine. They will become weakened and unable to cast spells until they find a healing pool in the next room. Chiropterus will be awoken and drop down on players if players bring the light near where they are sleeping.

In the second room, players must parkour up the flowstone pillars, making sure to stay close as to not be devoured by the darkness. Nullards will spawn on top of the pillars, but do not respawn, so it is advised they are taken out before the players begin their trek. There is a healing pool on one of the pillars that allows the Lightbearer to remove their weakness. If they do not remove it at the pool, they will be weakened for the rest of the raid.

In the third room, players must eliminate the Chiropterror to open a Void Hole.

One player will have to enter the Soulroot Tree and search for two [Interdimensional Isoptera], while players on the coast will have to kill [Soul Shrubs] and feed them to the Void Altar by standing upon it to allow the player within the tree to open Void Holes sealed with resin and sap.

The goal of players on the coast is to survive and gather souls. To give souls to the player, they must stand on the end portal frame block.

The Hunter inside of the tree must kill two termites inside of the Soulroot, and return their [Isoptera Hearts] to the Altar to complete the challenge room. It is recommended players swap the hunter periodically.

A Large, expansive room where players must partake in a challenge to defend and capture bulbs, à la Capture the Flag. There are three Blue Bulbs that players must defend from Bulb Catchers, who will attempt to take them and flee, as well as several mobs with Red Bulbs that must have their bulbs captured and returned to the Blue Bulbs.

If a Bulb Catcher picks up a bulb, then it will be announced in the center of the screen with "A BULB HAS BEEN TAKEN!". If a Bulb Keeper is killed, the player will pick up its Red Bulb and must run to a blue bulb. Players carrying a bulb cannot use spells.

When a player is carrying a Red Bulb from a Bulb Keeper, Face Eaters will spawn in large numbers around them. They are fast and without end, and will kill likely the player if they are not assisted.

When a Blue Bulb is charged, a title will appear stating "RUN TO THE EXIT PORTAL!", and players must congregate at the Void Rift formed at the 3/3 Blue Bulb.

At least one player must go through a Void Hole to a Hold Area atop a tree stump, where they will be required to stand on a purple square for a minute. Players below must survive hordes of Nocturnal Witnesses and destroy hostile Void Holes that spawn.

Occasionally, a hostile Void Hole will spawn, wherein players must destroy it in a limited amount of time. If they are unsuccessful, then the Heart of Darkness shall spawn and the timer will stop until it is killed.

Eventually Monochromatism will spawn, a fast, butterfly-esque mob that demands the player's attention.

'''The ☐☐☐☐☐☐☐☐ Anomaly''' is the boss of The Nameless Anomaly raid.

The boss is a metaphysical entity (A being outside all perceivable human senses, almost more of an idea or thought than physical) responsible for the tears between the Plane of Physicality and The Void, known as Void Holes. Their visual appearance seems to be skeletal in shape, missing anything below the torso, and possessing two white eyes in an otherwise almost entirely black body. In the ribs of the creature rests a blue orb of sorts, though the purpose and nature of it is presently unknown.

The boss fight against The Nameless takes place on a large, rectangular stone tablet amidst a near-indescribable surrounding.

Alongside having Wave, Multihit, and Meteor, The Nameless has a wide variety of unique abilities that are equal parts dangerous as they are bizarre.

After each of the three Challenge Rooms, you will be able to choose one of three randomly-selected powerups, increasing in tier from I to III with each successive challenge. Note that each set of powerups to choose from is independently randomized, so being offered a specific Tier II powerup in the second room will not necessarily mean that the corresponding Tier III will be available in the next room.

For further information on the Major IDs provided in some of these powerups, see the Identifications page. Inside the raid, you can right-click each powerup to see a description of their effects.

When you complete the raid, a chest will appear in the reward room. Open it to claim the reward. Raid rewards may include raid exclusive rewards, such as Mastery Tomes and Corkian Amplifiers as well as the Charm of the Void. It also has chance to include several emerald blocks, raid-exclusive fabled items, and horses. Other rewards include broken dungeon keys, teleport scrolls to Ahmsord and Lutho, and powders.

Additionally, there are six fabled items which can only be found from The Nameless Anomaly Raid Chest:

Throughout The Nameless Anomaly, an unknown informant will tell the players about the nature of The Nameless Anomaly, how it came to be, and its purpose in the ongoing War of the Realms. Upon entering each challenge room, buff room, and the passage leading up to The Nameless, a piece of dialogue will appear. All together, they form the following cohesive story:

Additionally, the boss area has Ancient Wynnic carved into the arena.