Troms is a major town in the Jungle. People mainly come here to meet up, buy potions, or bank their items. Troms also contains a passage that allows safe entrance to the Jungle between Ragni and the city of Troms without risk of dying from the Magma Slimes, bridge archers, and Crystal Shrines on The Great Bridge, though it is worth noting that one must do a level 57 quest to gain access.

Before the Corruption War began, Troms was a peaceful fortified city in the Jungle, serving as the region's main city and one of the Wynn Province's greatest cities, alongside Ragni. At an unknown point in time, Troms and Ragni were connected through a passage in the Pigmen's Ravine.[1]

When the Nether Portal was unearthed and the war started, Troms became an ideal location for refugees from other towns, mainly in the Wynn Plains, to take shelter in due to its distance from the Portal and its great fortifications.[2] At some point after the war began, the Corrupter of Worlds, a rogue monster who was the lead miner in the expedition that unearthed the portal,[3] was sealed into its cave by the Twains before it could do any real damage to Troms.[4]

A few centuries later, Troms' defenses were weakening due to the constant attacks on the city by Corrupted hordes, so, in 831 AP, the government of the city invited Slykaar, an exiled Iboju shaman,[5] to the city and asked for his protection. Slykaar agreed, as long as he was given human sacrifices from the city in order to fuel his magical defense.[6][7]

Some decades later, during another Corrupted attack, the leader of the Tromsian army known as General Skien was attacked by one of his soldiers who was infected by the Corruption. Due to this betrayal, Skien was unable to defend Troms, and the horde of undead would later decimate the city.[8] Skien was exiled to Skiens Island due to his failure, but not before taking most of Troms' army with him.[9]

It was then that Bob, a soldier who sought to learn the four arts of Wynn, arrived in Troms, and was horrified at the destruction that the siege caused. Amidst the destruction, he was taken in by Fier, his master who would teach him how to use the spear. During his time in Troms, the people of the city banished Slykaar as they saw Bob as their new hero. Slykaar, bitter and resentful, retreated into the Undergrowth Ruins where he conducts dark experiments to this day.[6][7] Bob later left for Ragni.

Around this time, a group of mercenaries known as the Sodeta Guild was created by the former-soldier Tisaun Sodeta. The mercenary guild often protected Troms and the Jungle from the undead, and was based in the Sodeta Manor deep into the Dernel Jungle. However, when the Sodeta Guild was invited to Cinfras by the Gavel Government, they accepted and left the manor, leaving it in ruin.[10][11] Some mercenaries are still in Troms to this day, though.

More recently, the Villager-run organization called WynnExcavation has set up two different excavation sites in the Jungle: Site D and the now-abandoned Site E,[10] in search of the Power Crystals. The organization has also taken over Troms' inner circle, essentially making the King of the city powerless and placing the city in WynnExcavation's control.[12] 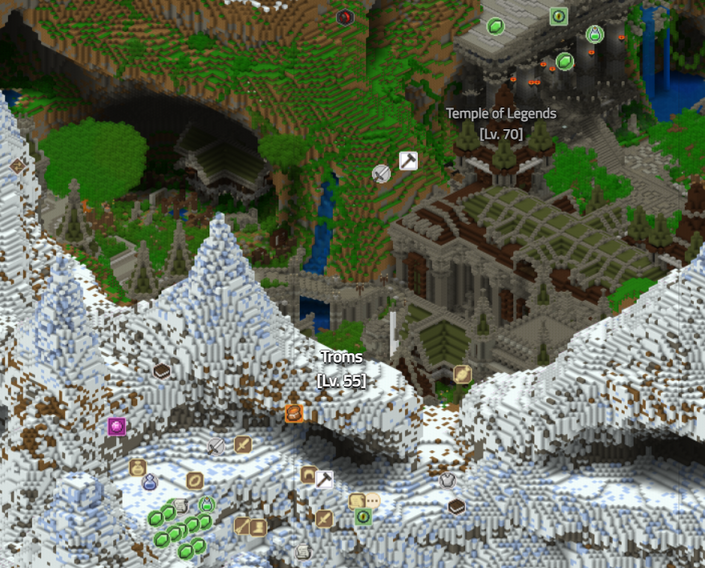