The Twain family was a group of magically gifted people that resided in The House of Twain.

Before the arrival of the villagers, Wynn had no magic. Such things had been forbidden for the peasantry of Fruma to learn, and as such these settlers came with only their wits and hard work to build the new province. Unfortunately, this lack of magic put the humans of Wynn at a great disadvantage when the forces of corruption arrived. Although no one in Wynn had the teaching to perform magic, children would sometimes be born that could harness great power without even knowledge of a single spell. One such magically gifted person was Marius Twain, who would come up with the idea of bringing many of these people together into a sort of team. Searching through those orphaned during the years of the war, he would find several children who possessed great magical strength. Taking them as his own children, they would together become the Twain Family that would protect Wynn for years.

For years, the Twains would protect the province, but over time they would be driven apart by hatred. The last straw broke when Marius died, and from that point forward they would stay apart. Over the next years they would all die, both to the corruption and its leader Bak'al. Sadly this hatred would mean that none of the siblings would follow Marius wish of continuing the search and teaching of magically gifted children, as he had done for them, which led to their legacy being all but forgotten for many years outside of the Nesaak region, though this may change with the resurfacing of a diary of theirs in recent years 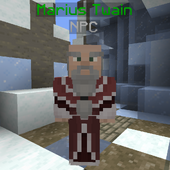 A powerful magic user, he was the one who adopted the many magically gifted around the province. From the stories he told the Twains, it was assumed that he was immortal, but this was not the case. In 570 AP he would die, and soon after the Twains would separate. He believed that the Twain family must stay together, and fight for the people of Wynn without payment.

Note: If you are looking for info on Theorick as a boss, then click here.

The master of ice magic, he is remembered to this day for the freezing of Nesaak. He lived in a mansion in what would become the Ice Canyon, and unlike his adopted father Marius, believed that as the protector of Nesaak, he deserved payment in both food and emeralds.[1] Using the money he took from the towns he protected, he built his home into a massive mansion filled with valuables.[2] As he lived in splendor, the towns people that he protected were poverty stricken, and often feared him as much as the monsters he guarded them against.

Theorick's ice magic was incredibly useful, because it was able to slow the spread of the Corruption. Late in his life he would gather a group of soldiers and head to the Roots of Corruption to go through the Nether Portal. Although unwise he would succeed in reaching the Nether, but in the process his mind would become corrupted. Upon his return, he froze himself and all of Nesaak in order to stop the spread of the corruption in the region and give time for someone to arrive that could actually kill him in that corrupted state.[3] Although his final intentions were noble, most of the people who lived in the region would die as it froze, and many more would die trying to kill him in the years to come.[4]

Unlike his siblings, Mael was not all that combat oriented. His ability was to see and communicate with the dead and while he could summon a form of magic wisps of energy, this was hardly the same as what his siblings could muster. Because of this, he would spend near all his time in the Twain mansion putting the spirits of the dead to rest. Because of his connection to the dead, Mael was generally unpopular among the other Twains, and actively hated by Theorick[5] for his kindly treatment of the many spirits he came into contact with.[6]

After the Twains went their separate ways, Mael would stay behind in the mansion to fulfil the wish of Marius that he would one day teach someone. That someone would be Bob, who would visit him hundreds of years after the disconnect with the other Twains, to learn archery and the history of the world Mael had lived in for so long.[7] Eventually like Marius, Mael would die, and without him to put the many angry spirits to rest, they would destroy the mansion and make the surrounding region generally uninhabitable. To this day his spirit still exists, and can be met by the player in the Graveyard behind the mansion.[8]

Rickeo wielded fire magic. He, along with his other siblings, left the Twain Manor after Marius's death. There is no explanation as to how he specifically died, but it was almost certainly to the corruption.

His flames could counter the power of Theorick's ice and would allow the player to open Ice Barrows in modern times.

Dwendle was capable of performing air magic. After leaving the Twain, he would start a family. One of his descendants is Twendle. Considering he was able to have a family and raise kids, Dwendle probably lived a little longer than most of the Twain, but eventually like the others he too would fall.

Twendle is a descendant of Dwendle with no special gifts known. In The House of Twain quest, he asks the player to retrieve a diary by one of the Twain, so that he can learn of their many secrets and tell them to the world. Apparently the Twains had a fair amount of money somewhere outside the mansion, as Twendle claims to be rich.