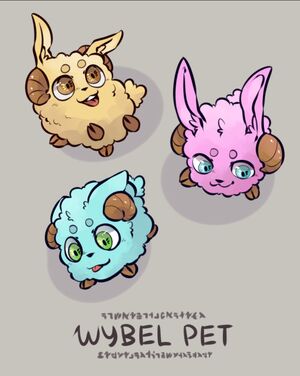 Wybels (pronounced like nibble) are an animal species native to outer space but mostly endemic to the Gavel Province, which can be found throughout Wynncraft. They resemble an amalgamation of real-world animals including rabbits and sheep, and are found in a wide variety of colors and other variations. They were first introduced in the 1.14.1 Gameplay Update. Their fur has unknown magical properties.

The only places where Wybels can be found in the wild are on Wybel Island in the Sky Islands. Most Wybels are generally passive, though certain unique, named Wybels spread across Wynn and Gavel are cuddly defensive mobs and will follow you if you find them. One Wybel in particular is extremely aggressive; in general, however, they have little fighting ability. The primary drop of most Wybel mobs is Wybel Fluff, a common Crafting Ingredient used in Tailoring at level 90.

In reality, the Wybels belong to an extremely advanced alien species, which possesses unique technology such as televisions, recordings and space ships. One of these spaceships recently crash landed into the Sky Islands, which is where the Wybels spread across the world came from.[1] They soon became household pets, though it is unknown whether they still retain their intelligence or lost it during the spaceship's impact.[2] They are also able to sniff out and detect cosmic magic, and sometimes try to bring them home, which some conspiracy theorists use as proof that the Wybels are actually evil creatures that bring insanity-inducing stones back to their owners to warp their minds.[3][4]

Many varieties of tamed Wybels are available as Pets. However, they are not for sale in the Wynncraft Store, and can only be found in Loot Crates. They range in rarity from Common to Black Market rewards. Pet Wybels can be acquired through redeemable Wybel Tokens, available from Loot Crates, and like other pets, any Wybels you own can be renamed and summoned to follow you. Common-tier Wybels include White, Cream, Chocolate and Gray; Rare Wybels are Mint, Pink or Violet; and Epic-tier Wybels are the Sea Blue and Sky Blue varieties. An Orange Wybel pet is also available as a Godly-tier reward.

Cybels, a new variation of Wybels, were added to the Crate rewards in the 1.16 Corkus Update. This Corkian variety are robotic in nature, and emit a plume of smoke behind them. They include Bronze, Chrome, and Carbon Fiber Cybels, as well as the Orange Cybel, a cyborg version of the Orange Wybel. The Orange Cybel pet is a Godly reward, while the other Cybels are Epic rewards.

With the addition of Black Market-tier Crate rewards in the 1.17 Dungeons & Discoveries Update, four new Black Market Wybel pets were added: Angel, Dragon, Rainbow and Demon Wybels. Each has a unique skin and other unique cosmetic effects.

As of the Festival of the Bonfire, there are 5 new Wybel designs, four Rare Rewards: Vibrant, Cosmic, and Beach Wybels; and one Epic Reward: Wybun. Each has themed dialogue when spawned, and occasionally while active.

Festival of the Spirits adds in 5 more, three Rare: Wisp, Jack-O-Wybel, and Zombie Wybels; one Epic: Nightmare Wybel; and one Godly; Wybomination. Like Festival of the Bonfire Wybels, they have themed dialogue.

Wybel Island is a lush island at the bottom tier of the Sky Islands in Gavel, and the natural habitat of Wybels in the province. It is dotted with small nests and inhabited by level 90 Wybels of every color. These include passive Wild Wybels, Affectionate Wybels which will follow you around, and neutral Scared Wybels, which will fight back if attacked. None of these varieties are particularly dangerous or difficult to kill, and the island itself is generally peaceful, but dangerous hostile mobs from neighboring islands may sometimes wander to it. The unique Wybels on the island are its only significant feature, aside from The Orange Wybel.

The primary attraction of Wybel Island is The Orange Wybel Boss Altar. Hidden beneath the island is a technologically-advanced laboratory that apparently belongs to the titular Orange Wybel, dubbed the "ultimately powerful" Wybel[4] and the only one of its kind. A waterfall passing by the south side of the island gives access to a short parkour course beneath it, which in turn leads to the empty laboratory.

Inside is an Altar that can be activated with 8 Wybel Fluff to fight the level 140 Orange Wybel. It is aided by hordes of level 80 Rowdy Wybels, as well as powerful destructive machines built out of "flower petals and wood pulp". The Orange Wybel is one of the most difficult bosses in the game, recommended for only the strongest players, and it also appears to be much more intelligent than other Wybels (being the only one known to speak). It drops the crude but very powerful Stinger, Bonder, Braker and Slider, all level 99 Legendary weapons, as well as Borange Fluff, a coveted level 100 Crafting Ingredient.

A robotic recreation of the Orange Wybel built by Doctor Legendary, the Orange Cybel, is the second-to-last boss in the Legendary Challenge. It has significantly increased damage output compared to the Orange Wybel, as do its Remote Controlled Cybels, the equivalents to the Rowdy Wybels.

Throughout Gavel and Wynn, many Wybels have been tamed and kept as pets; an Ahmsord Citizen mentions that after Wybels suddenly appeared, many people took them in. Nine such Wybels, each a different color, can be found in many of the major cities of the world. They are all defensive mobs, and will follow you if you find them, but some cannot leave their houses. They include:

Passive, level 35 Tamed Wybels and Hungry Wybels in a variety of colors both wander the Detlas Ballroom, part of the Meaningful Holiday quest.

Level 95 Fallen Wybels, found only in a small cave in the Void just outside the Void Village, appear in a variety of colours and in three types (passive, defensive and neutral); like their counterparts on Wybel Island, they have little significance aside from being a source of Wybel Fluff. Notably, however, unlike all other creatures in the Void, the Fallen Wybels do not appear to be mutated.