Wynncraft is a free-to-play MMORPG Minecraft server. It is owned and operated by the Wynncraft team (mainly consisted of the CraftedMovie team and the Content Team). The latest update is the 1.20 Gavel Reborn update. The official website can be accessed here. The server and the forums are operated and moderated by the Wynncraft Staff. When playing on the server please make sure to follow the Rules. 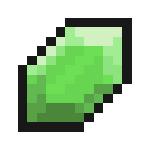 Emerald, the base currency in Wynncraft

The goal of Wynncraft is for players to explore the vast lands and cities (and ocean), and to kill monsters to gain experience and level up. Leveling up unlocks new armour, weapons, and accessories for your character to use. One can also complete Quests in order to gain more experience and emeralds. All quests have level requirements and vary in the amount of activity needed and the intensity. There are five playable classes - Warrior, Archer, Mage, Shaman and Assassin. Each class can only use a specific type of weapon, however all can join the same servers (provided they are not full) and have the same experience.

The currency of Wynncraft is the Emerald, which is found by trading with other players, killing monsters, completing dungeons, finding loot chests, breaking pots, or finishing Quests. 64 Emeralds can be converted into one Emerald Block at banks in various cities; these can, in turn, be converted to Liquid Emerald.

The number of servers depends on the active playerbase. The system creates servers every time there is a high influx of players joining, while servers get removed when there are fewer players online. Each server can be accessed by using the Quick-Connect compass in the lobby or walking through the portal in the lobby. You can get to the lobby while in-game by typing /lobby or /hub.

Donations are contributions of real money made to the Wynncraft team so they can improve their server and afford living expenses. There are various methods of donating. One can buy the VIP, VIP+, HERO, and CHAMPION ranks, costing $6.99, $27.99, $84.99, and $170.99 USD respectively (when not on sale). There are also Crates, Pets, and Bombs for sale in the store. All donations are non-refundable, and should only be made on the official store which can be found at store.wynncraft.com.

As of April 14th 2014 it is now illegal to sell in-game items for store packages.

Wynncraft's policy and rules DO NOT tolerate any cyber-bullying, harassment, trolling, insults, rudeness, spamming, duplicating items, bad behavior or hacking (using special modifications for Minecraft in order to cheat the game). THESE ACTIVITIES WILL RESULT IN A TEMPORARY OR PERMANENT BAN FROM THE WYNNCRAFT SERVERS.

Anyone witnessing any of these activities is strongly advised to post evidence in the "Player Reports" section of the Wynncraft forums or do /report [player name] [reason] to alert a moderator. Certain types of hacking (for example fly-hacking) will require video evidence. Wynncraft's goal is to provide a safe, enjoyable experience for everyone and anyone. However, if you experience continual harassment or bullying online, it is recommended to tell someone you trust or contact your local police regarding cyber-bullying.